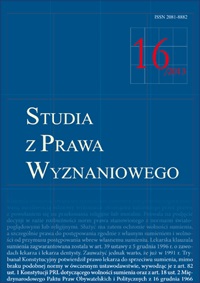 Summary/Abstract: Taking the Lithuanian perspective on the substantial progress of secularization processes Europe-wide, a number of general observations can be made. First and foremost, it must not be overlooked that the forefathers of the European integration process were politicians of the Christian democratic colour, and the process of integration as such was endorsed by the Holy See. Still, however, the Church would warn (and still warns) that it was impossible to build a true unity of the Old Continent by denying the Christian roots of the European culture and without respecting the rights inherent in human nature. The actual implementation of the idea of integration seems, however, to ignore some urgent warnings sent out by the Church. It facilitates the progress of secularization processes, and, in Lithuanian law, it manifests itself, among others, in the proposals of changes in regulations regarding marriage understood as a permanent union between a man and a woman. No doubt, it poses a major challenge to the Church; obviously, it will only be able to resist such tendencies if its firm stance and testimony deserve credibility. It should be noted, however, that the implementation of the proposals of separation of legal regulations from the principles inherent in human nature also threatens the society, regardless of the ideological standpoint of its members.