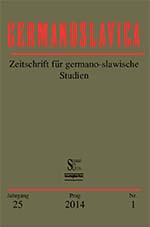 Summary/Abstract: In 1957, a discussion of literary reviewers about the nature of the contemporary modern novel started on the pages of a newly established Slovak journal of literature and art Mladá tvorba [Young Authorship] (1956–1970). The debate was launched by Jozef BOB in the journal Kultúrny život [Cultural Life], who termed the novel by German author Hans FALLADA Wolf unter Wölfen “contemporary”, even though the book was published as early as in 1937. Among the authors who took part in the polemic in Mladá tvorba, were the Anglicist Ján VILIKOVSKÝ, the literary reviewer and fi lm critic Ján ROZNER, and the cultural worker and writer Vladimír MINÁČ. The conclusion of the debate shows that the perception of the prose in Slovak culture in late 1950’s was still burdened by the ideological nature of socialist realism. Mladá tvorba, however, gradually became a platform of reception and thinking about the modern world literature, and thus, especially in 1960’s, it significantly contributed to the democratization of Slovak culture.