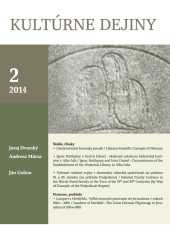 Summary/Abstract: Currently, the conceptualisation of the relations between literature and memory is very diverse. It can be studied on the background of intertextuality, topics, canon, metaphor, and/or from the perspective of the question how to construct the memories as a narrative. A link between literature and time plays an important role, especially in autobiographic memory. A systemic theory, cognitive psychology, gender studies and media studies belong to the latest theoretical approaches concerned with literature and memory. Contemporary interdisciplinary memory research deals with a question: to what extent can the examined phenomena be classifid? Because of this, my paper has a systemic nature. It evaluates the link between literature and memory on the background of three concepts: the memory of literature, memory in literature and literature as a medium of memory. Within the cognitive-psychological research of organic human memory, the term “memory” is defied a reservoir of information. On the other hand, the term “reminiscence” is perceived as a process of activation of the parts of this reservoir, i.e. the process of recollecting. Thus, the basic relationship here seems to be an interconnection between individual and collective memory, because the information which is not received and explained through individual consciousness cannot produce any activity. The collective acts of recalling without individual updates vanish in emptiness. In addition, cognitive psychology distinguishes several systems of memory. The conscious reminiscences are updated either through “semantic” or “episodic” memory. Semantic memory involves learned, symbolic knowledge (e.g. the Earth is round). Episodic memory is linked to a specifi time and context (e.g. the memories of the fist day at school). Obviously, this does not rule out the temporal-contextual linkage of semantic memory as well. Besides explicit memory, there is also “implicit” memory in cognitive psychology. The latter involves the reminiscences that can be recalled unconsciously. These include procedural memory which allows us to perform certain activities automatically, such as riding a bike or playing the piano. Through the senses, the human body can also implicitly “recall” past events. For instance, the smell can bring back memories of childhood, either pleasant or traumatic. There are no strict boundaries among semantic, episodic and procedural memory and they are applicable within both individual and collective memory.