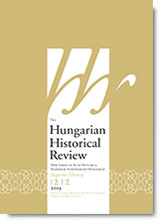 Summary/Abstract: With the death of King Andrew III of Hungary in January 1301 the male line of the Árpád dynasty that had ruled the Kingdom of Hungary for precisely three centuries died out. It was self-evident and natural to everyone that a ruler who was linked to the Árpáds through the female line must be elected to head the kingdom; however, opinions were divided as to who actually should wear the Hungarian crown. One of the important factors of the interregnum prevailing in Hungary in the first decade of the fourteenth century examined below is the support for royal candidates arriving from outside the country’s borders, which in many respects contributed to the coronation of the last remaining candidate in accordance with expectations and traditions in 1310.