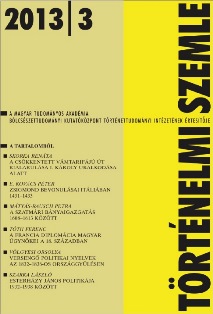 A csökkentett vámtarifájú út kialakulása I. Károly uralkodása alatt
The Emergence of the Trading Route of Reduced Tariff during the Reign of Charles I

Summary/Abstract: At the turn of 1335 and 1336 Charles I, king of Hungary, broke with the tradition of alliance with his Habsburg cousins, which had existed practically since his arrival to Hungary, and decided instead to prepare for a constant war against them. It was under the sign of this radical shift, and emphatically not in order to undermine the economic dominance of Vienna, that Charles, in accordance with his colleagues on the thrones of Poland and Bohemia, took those measures affecting trade (the creation of a trading route with reduced tariff, and the establishment of a staple at Brünn), which maintained the connection of the Hungarian Kingdom with the western European markets in the subsequent period of prolonged military preparation.