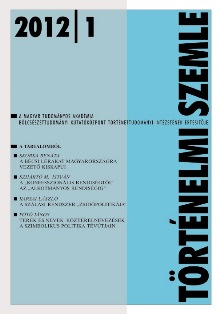 Summary/Abstract: The privilege of 1221, which established the staple right of Vienna, is a source of prime importance for Hungarian economic history as well, for it contains the first written reference to the transfer of goods from the German Empire towards the medieval Kingdom of Hungary. It was in vain that the privilege prohibited Southern German merchants from entering Hungary, for Hungarian sources prove beyond doubt that the presence of such merchants on the Hungarian markets was continuous throughout the 13th century. Several theories have been elaborated in recent scholarship in order to account for the initial inertia of the staple right of Vienna. The present study demonstrates that neither the privilege of 1221 itself, nor the measures which were intended to confirm and modify it during the 13th century were buttressed enough by legal sanctions, and thus the legal loopholes made it possible for those merchants who wanted to enter Hungary to break the prescription. It was only as late as in 1351 that the regulation assumed a legally unbreakable form, for then the staple right was completed by the prescription of a compulsory route, the penalty of confiscation and a prohibition of trade among foreign merchants themselves. The absence of German merchants in the early 14th century has so far been explained in Hungarian scholarship by the strict regulation of the Viennese privilege in 1312, but in fact the Fridericianum did not hinder the crossing of merchants to Hungary. It is consequently not in the legal changes that took place at Vienna, but in the political history of the Hungarian Kingdom and the Holy Roman Empire that the reasons for the absence of German merchants from Hungary should be looked for. On the one hand, trading routes became more dangerous in the wake of the internal wars in Hungary, which indeed culminated in the first decades of the 14th century. On the other hand, the conflict which then opposed to each other the two elected Roman kings, namely Frederick I of Habsburg (the Fair) and Louis IV (the Bavarian), seriously undermined the position of Regensburg, the leading trading city of the Southern German region, which had so far played a dominant role in the commercial life of both the Austrian provinces and the Kingdom of Hungary.