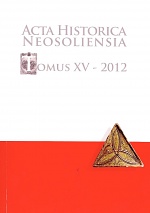 Summary/Abstract: With example of selected medieval villages, we would like to illustrate the life along the Hungarian-Turkish borders and the way how people had survive there at complicated times full of threat. We can make this effort since this territory has been relatively well archeologically researched and we have enough written reports about its settlement in the 16th century. All three medieval villages being subject to the research are located in the bounds of current town Palárikovo currently with approx. 5000 inhabitants (district Nové Zámky, Slovakia). Citizens´ live was concentrated in the bounds of current Palárikovo on three central areas at the beginning of the 16th century. The history confirmed existence of medieval villages Palárikovo (villa Meger), Križovany (villa Kerezthur) and Svätý Jur (possessio Zenthgergh), mentioned in the written deeds also at the beginning of the modern times. They belonged to the Šurany castle dominion. Their complicated neighborhood with the Turks began in 1530. Sporadic but intensive attacks resulted in damaged houses and lives up to total reduction of inhabitants´ headcount. The most destructive invasions were repor¬ted in years 1533, 1575, 1599 and later that is also reflected in the lists of ports. 15-years taking war caused major fatalities; two villages were completely unmanned before year 1608. Guard castle at Križovany was demolished in the 2nd half of the 16th century. Settlement Svätý Jur disappeared from the chronicles at the end of the 16th century. Palári¬kovo and Križovany were slightly revived at the beginning of the 17th century. During peaceful period of years 1606 – 1663, significant inflow of inhabitants wasn´t reported; the villages were small with low headcount and the destruction was completed by Turkish annexing of the neighboring fortress Nové Zámky in 1663. The cadastre was bought as lands by a „foreigner“ from Moravia, Dominik Andreas von Kaunitz, who brought his villains with from his Moravian property. The modern history of current village has been date since arrival of the Moravian settlers after year 1690.