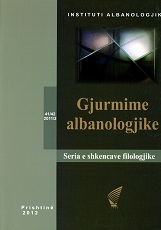 Summary/Abstract: Development of common literary language for all Albanians, with set grammatical and orthographical rules, was put as one of the main requirements of Revival’s cultural program. The issue of language was given a central place in National Revival’s program not only because it was a great symbol of national identity and antiquity, but also because establishment of Albanian as an official language was a first step and decisive sign of independence. In fortieth anniversary of the Congress of Orthography, present processes and duties in the field of standard Albanian are not simple. Among other things, they are also related to the approach with European legislation, with the entry into NATO and EU accession preparations, which have been major developments in the life of the Albanian state. In present time more than in any time is required Albanian standard language, determined and compatible with international languages. Of great influence in present time are also the development of electronic technology and ever greater dependence on international electronic communication. English also exerts great pressure as the language of globalization. Bilingualism and translation are also of great relevance in state-administrative operation and broader.