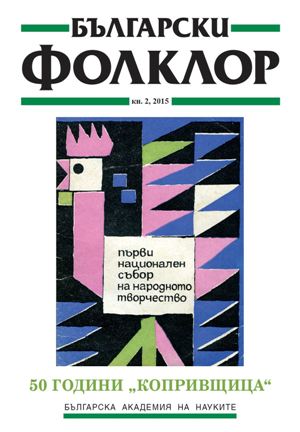 Bulgarski folklor [Bulgarian Folklore] was found in 1975 and is recently published in Bulgarian in 4 issues per year. Translation of the content in English and extensive summaries of the basic articles in English are provided as well. In addition, one can find in the different numbers of the journal contact information about the authors who are not affiliates of the Institute and references to the Internet site of the Institute where the details of the rest are published. The editorial board of the journal includes prominent Bulgarian scholars in various spheres of anthropological knowledge (anthropology of music and dance, anthropology of verbal traditions, anthropology of folk arts and visual forms, etc.), as well as an international advisory board of distinguished scholars. Chief Editor: Stanoy Stanoev. Editor: Regina Miteva. An important feature in the current editorial strategy is the orientation towards thematic issues on contemporary interdisciplinary problems, such as: “Politics and Folklore”, “The Biographical Approach”, “The Language of the Body”, “Media and Folklore”, “Discourses of Diversity”, “The Capital and Its Inhabitants”, “Anthropology of Folklore”, “Town and Heritages”, “Woman in Folklore”, “Ethnolinguistics and Folklore”, “Generic Memory and Folklore Culture”, “Communities and Images”; “The Danube Riversides – Cultures, Traditions, Identities”; “South-Eastern Europe: Cultural Transformations and Perspectives”. The scholarly publications in these issues are dedicated to key topics in the field of humanitarian and social sciences. Especially important are also the articles in the “Alma mater” section, aimed at discussing lecturing and tutoring in the field of folklore studies, anthropology, ethnology and art history. The journal is well-known for its applied section where exemplary field investigations and materials are regularly published. Recently several journal numbers dedicated to topical studies, representative of various national research traditions or of joint investigations in various fields have appeared: “L’ethnologie en France”, “Bulgaria – Italia. Spazio culturale europeo”, “Identity and Identities” (in cooperation with the Romanian Academy of Sciences), “Folkloristics in Russia”, “South-Eastern Europe: Cultural Transformations and Perspectives” (in cooperation with the Romanian Academy of Sciences). Besides, in these special numbers, as well as in some other issues, many foreign authors from Great Britain, France, Italy, Russia, Spain, Finland, Poland, Germany, Czech Republic, Hungary, Macedonia, Ukraine, Moldova, Romania, USA, Libya, Vietnam, etc. have published. The journal is included in the following international reference books: L’ethnologie dans les revues en Europe; Garae/Hesiode, Carcassonne; Ethnologia Europaea, London. It is refereed in the following editions: Anthropological Index Online (Great Britain); Demos (Germany); International Folklore Bibliography (Germany); Internationale Volkskundlische Bibliographie (Germany); Slavistická folkloristika (Slovakia). Through the section for international book exchange at the Bulgarian Academy of Sciences, the journal is circulated in all the big research centers, with which the Academy is in contact – in Europe (Austria, Great Britain, Germany, Hungary, Slovenia, Belgium, Czech and Slovak Republics, Poland, Croatia and many others), as well as in other continents (for example in Australia, USA, Japan, China).