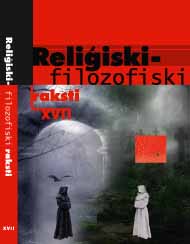 “Religiski-filozofiski raksti” (Religious−Philosophical Articles) is continuation of the series of collections of articles started back in 1925, published by the Society of Philosophy and Religion (renamed "Society of Religious Sciences" in 1938), which was founded at the University of Latvia in 1922. This Society united Latvian intellectuals - theologians, philosophers, historians, lawyers, writers and others, who were interested in the problems of religions and investigations of religion from philosophical, historical and psychological aspect. The basis form of activities of this Society included lectures and discussions as well as publication of the collection “Religiski-filozofiski raksti” (1st issue in 1925, 2nd issue in 1928, 3rd issue in 1930, 4th issue in 1933, and 5th issue in 1936). In 1940, the 6th issue of “Religiski-filozofiski raksti” was to appear. However, the Soviet occupation prevented this. Almost all of the articles for the collection were later lost. The publishing of the “Religiski-filozofiski raksti" was renewed by the Institute of Philosophy and Sociology in the beginning of the 1990ties. The duties of the Editor-in-Chief were undertaken by Professor Haralds Biezais (1909-1995) who was one of the authors of the pre-war edition and later became a world-famous researcher of religion. In the introduction of the renewed edition, characterizing the current epoch in Latvia, he noted that, to continue the work now underway, a very hard and difficult transitional period would be to overcome. "It is, however, the common way for the people, with all its contradictions and delusions which will have to be encountered. The belief in the creative spirit of people, or if anyone likes it better - the myth in its power is towering over it. In this mood, the editorial board releases this edition to the reader. We hope, that it will facilitate fruitful development of the philosophical and religious thought and strong sense of the continuity of the Latvian culture", wrote Haralds Biezais in the introduction. The 6th collection of articles was issued in 1997. After that the 7th volume of “Religiski-filozofiski raksti" was published in 2001, the 8th volume - in 2003, and the 9th volume was issued in 2005. The 10th collection is in process now. The Editor-in-Chief of these four collections is Dr.Phil Solveiga Krumina-Konkova, the compiler and editor - Nikandrs Gills. The “Religiski-filozofiski raksti" represents already established traditions of free scientific religious studies and religious philosophical reflections in Latvia. Readers of the edition can find interesting and useful materials in their quest for religious philosophical truth, and also serve as a scholarly source to obtain the information on religious problems in Latvia and in the world.