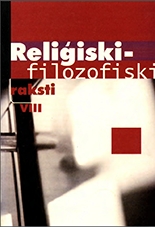 Summary/Abstract: In the current publication the author has deepened and specified research of the historical sources of the Jehovah's Witnesses in Latvia: a special attention is paid to the latest history of the movement - 40-s, 50-s Summary 395 and especially to 90-s of the 20th century, when on the grounds of the Constitution of Latvia and Laws of the Republic of Latvia the Jehovah's Witnesses legally tried to reestablish their status of religious organization in Latvia. According to the documents from the Latvian archives, it is possible to conclude that, as early as in 1921 there were a few Jehovah's Witnesses in Latvia. In July of 1926 the Watch Tower Bible & Tract Society sent its representatives to Latvia, where the headquarters were opened. The Jehovah's Witnesses were registered in Latvia for the first time on March 14,1933 as the International Bible Students Association. But already on May 15, 1934, after the dissolution of the Parliament, the association was closed. Attempts to reestablish the Jehovah's Witnesses registration as the Watch Tower Bible & Tract Society were equally unsuccessful. After the incorporation of Latvia into the USSR in the summer of 1940, the chief of the Latvian department Alfred Percy Dunham was forced to leave Latvia on October 27 in order to serve in Australia.