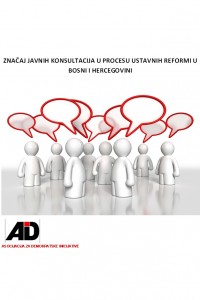 Author(s): Snježana Ivandić, Anđela Lalović, Aida Vežić
Contributor(s): Mirela Selmanović (Editor)
Subject(s): Law, Constitution, Jurisprudence, Constitutional Law, Human Rights and Humanitarian Law, Civil Society, Public Law, Politics and law, Politics and society, EU-Legislation
Published by: ADI Asocijacija za demokratske inicijative
Keywords: BiH; constitution; reform; public consultations; NGO; civil society; law; human rights; public policy; politics; Brčko district; EU standards; public debate;
Summary/Abstract: The process of constitutional reforms in Bosnia and Herzegovina has so far been driven without a serious participation and acceptance of the recommendations of civil society organizations in Bosnia and Herzegovina. Although the Council of Ministers of BiH has brought documents that regulate and facilitate the participation of citizens, civil society organizations and all other stakeholders in the process of drafting any legal act of public interest, the implementation of these documents has not been applied in practice. Over the past two years, a number of civil society organizations have been active in drafting possible constitutional solutions in accordance with the principles of the European Union and international standards in the field of constitutional law and human rights. Unfortunately, given the exclusion of civil society from the process of public consultation on constitutional reform and, ultimately, purely formal implementation, the prepared proposals were not taken into account by the competent institutions. Accordingly, the Delegation of the European Parliament for relations with Western Balkan countries has published a joint statement with the Joint Committee for European Integration of the Parliamentary Assembly of Bosnia and Herzegovina according to which constitutional reform, as a key reform in Bosnia and Herzegovina, must involve and engage civil society in this process in order to achieve the efficiency, fairness and functionality of the state.