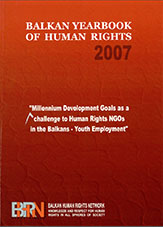 Summary/Abstract: At the 4rh BHRN Assembly meeting which was held on March 10th 2007 in Skopje, Balkan Human Rights Network again proved to be one of the strongest HR networks in the region with highly committed member organisations. The BHRN is built on strong NGOs characterized by the following: Long standing commitment, a relatively high degree of sustainability on own terms, strong identity, regional perspectives, and professionalism. The establishment of the BHRN has promoted a dialogue and co-operation between the different human rights organisations in the region. Another aspect of capacity is the member organisations' capacity to implement the strategy that has been adopted by the BHRN.