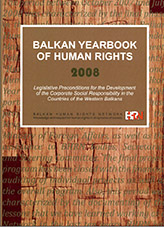 Summary/Abstract: The period between October 2007 and July 2008 was characterized by the final phase in the implementation of several Balkan Human Rights Network projects: "Gender Mainstreaming in Media, Government, Police and Court", "Guardians of Rights", "Human Rights and Business", "Regional Human Rights Report 2007", "Balkan Yearbook of Human Rights 2008", "Web portal" and "BHRN Newsletter". These projects were fully supported by the Neighbourhood Programme of the Danish Ministry of Foreign Affairs, as well as the assistance to BHRN bodies, Secretariat and Steering Committee. The final project program has been closed with the financial auditing of individual projects as well as the overall program. Also, this period was characterized by the documenting of the lessons that we have learned working as a Network in the last ten years. BHRN has been publishing annual reports every year in which we have presented our work, but when one is making an overview and evaluation of 10 years of work and more then 70 regional projects that were implemented then one is being confronted with a big task. There are various criteria for evaluation - number of final beneficiaries, geographical area covered, number of follow-up projects, synergy with other initiatives, impact on the target group, etc. Other important events that happened in this period concern closing down of the Neighbourhood Program of the Danish Ministry of Foreign Affairs after eight years of program implementation, implementation of the suitability strategy of the Network and sustaining the Secretariat as an independent unit. The Network will be sustain as a forum for the exchange of information and good practices, and members will be able to apply to different donors as a coalition of organizations.