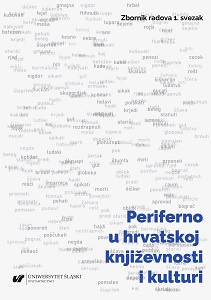 Author(s): Miranda Levanat-Peričić
Subject(s): Comparative Study of Literature, Croatian Literature, Serbian Literature, Book-Review, Theory of Literature, Wars in Jugoslavia
Published by: Wydawnictwo Uniwersytetu Śląskiego
Keywords: Igor Mandić; literary reviews; comparative approach to Croatian and Serbian novel; post-Yugoslav context
Summary/Abstract: Publication of a book of literary reviews Romani krize (The Novels of Crisis) by Igor Mandić in Belgrade in 1996, as well as the book promotion in Serbia, have been the subject of sharp attacks on its author in the Croatian media. In this “case,” which Mandić himself called “the chase of the collegial choir of elite commentators” for an “insignificant book of literary reviews,” several peripheral levels that are attempted to impose as dominant or to compete for a more favorable discursive position can be distinguished. First of all, the complex of peripheral is in the very status of literary criticism, the marginal letter, inferior to the prestigious discourses of belletristic and literary theory. However, as Mandić underlined in the foreword to The Novels of Crisis, this “by status wholly devalued writing, no matter how small, could always be used as a ‘symptom’ to raise some sort of ward-heeler’s alarm.” Regardless of the ironic modus of this attitude, the “ward-heeler alarm” that followed completely departed from the subject of this Mandić’s collection, or a decade of Serbian and Croatian literary productions, from the 80’s to the 90’s. Finally, precisely this literary period, which Mandić defined as a decade after the death of J. B. Tito and M. Krleža until the break-up of the SFRY, as the last decade of literary and cultural life in a common state, after its disintegration remained on the historical periphery of newly established national canons. However, the most important peripheral level of the whole of this “case” is concerned with the approach to the body of texts that this book deals with, i.e. a comparative study of Serbian and Croatian literature. At the time it was published in 1996, from peripheral cultural positions the comparative approach to the Croatian and Serbian literature was perceived as a radical political provocation that comes from the common past, in the wake of its renewal. In this work special attention is given to Mandić’s choice of Serbian and Croatian literary titles, hence to the very content of the Novels of Crisis. However, since the cultural context of this book goes beyond the literary criticism of the decade to which it relates, its significance is looked into from the aspect of polemical discourses this book produced, even at the periphery of the Croatian nineties.