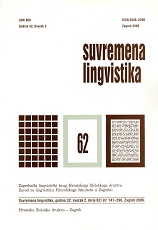 Summary/Abstract: This paper gives an outline of researches conducted by three authors we found most relevant for description of so-called "active syntactic construction. Since it seems to be universally accepted, we start from Dixon's distinguishing split-S and fluid-S patterns as two basic types of the split systems caused by the semantic nature of the verb. Second part of the paper refers to the Johanna Nichol's research into global typology. Starting from the Klimov's observation that certain features cluster together and are associated with certain types, she has tested correlations among clause alignment, morphological marking type, morphologycal complexity and word order, as well as correlations between these and the other categories. On the big sample of the world languages she follows distribution of these language features with an aim to find some statistically significant pattern which could confirm areal or typological correlations between these features. Correlation chain of head-marking morphology, lower complexity and split-S type of alignment, as well as correlation chain of dependent-marking morphology, higher complexity and fluid-S type of alignment, we found the most stimulating foe the subject of this paper, because it confirms basic typological differences among languages with split-S and fluid-S patterns, Third part of the paper presents Marianne Mithun's work., Although everyone emphasizes semantic bases of these syntactic patterns, only Mithun researches rich variety of semantic distinctions underlying different construction. It leads her to detection of two systems: first one which is based primarily on the lexical aspect of the verb she calls "active/stative" or "active" and the other one which is primarily based on the semantic features of the participants (actor and undergoer) she calls "agent/patient" or "agentive". Finally, in the light of presented works, we give an conclusion mostly regarding differences between split-S and fluid-S types of constructions. Although these constructions show certain formal similarities, they are basically different in terms of what they grammaticalize: Dixon's split-S and Mithun's active patterns are motivated by verbal semantics, as it grammaticalizes lexical categories on verbs, whereas Dixon's fluid-S and Mithun's agentive are motivated by nominal semantic, as it codes nominal semantic roles.