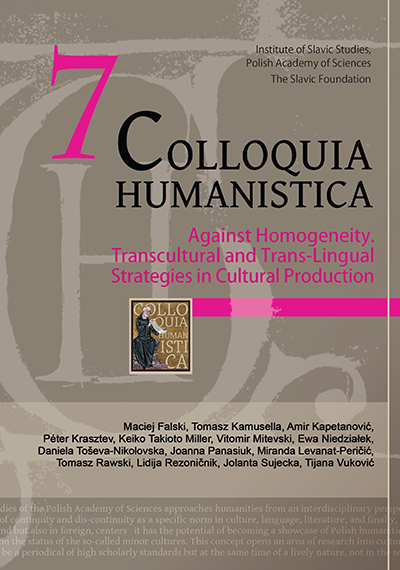 Summary/Abstract: Although the chronotropic approach to the novels of exile is almost self-explanatory, specific features in post-Yugoslav exile narrations evoke a separate chronotype interpretation. First of all, post-Yugoslav literature is additionally loaded with an identity burden because the abandoned areas of the 1990s for the exiled writer do not disappear at a metaphorical level, by turning into a mnemotope, but in the actual breakup of the political entity. Instead, the imaginary supranational heritage transforms into a kind of counterculture, mostly affirmed by exile writers. Therefore, returning to the abandoned area often becomes possible only as a return to the past. Tis paper will follow the literary theme of exile comparatively. It will start from the reflective nostalgia in the prose of Dubravka Ugrešić (the Ministry of Pain), through global exile which mirrors the history of the relationship between European persecutions and America as an unfair homeland which destroys all identity countenance in the novels of Aleksandar Hemon (Nowhere Man; The Lazarus Project). Tis theme will then proceed to the intra-Yugoslav “inherited” exile in the novels of Goran Vojnović (Chefurs Raus!; Jugoslavija, moja dežela [Yugoslavia, My Homeland]), which, like a curse of the genus, fathers left to their sons. In the texts mentioned above, the chronotype of exile is dealt with at the level of genre, as the major, supreme chronotype that includes or opens space to a series of specific local chronotypes, which are fundamental to exile narration. We also encounter these motifs in other genres, but in exile narration they are a pillar of the genre. They are, by nature, chronotropic because they are realized through the binary spatial-temporal categories of presence and absence, affiliation and non-affiliation, anchoring and nomadism. In this paper, I will look at three such chronotype motifs: 1) the motif of a home as a non-place or a place of absence; 2) the motif of the other/mirror country and the other/ “mirror” history; 3) the motif of return and travel (by train), which regularly invokes the stereotypical representation of a place and the past.