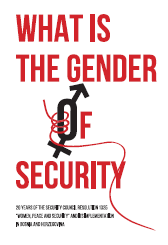 Contributor(s): Amila Ždralović (Editor), Saša Gavrić (Editor), Mirela Rožajac-Zulčić (Editor)
Subject(s): Politics / Political Sciences, Politics, History, Social Sciences, Gender Studies, Law, Constitution, Jurisprudence, International Law, Human Rights and Humanitarian Law, Civil Society, Sociology, Recent History (1900 till today), Security and defense, Military policy, Social differentiation, Studies in violence and power, Post-War period (1950 - 1989), Transformation Period (1990 - 2010), Present Times (2010 - today), Migration Studies, Peace and Conflict Studies, Asylum, Refugees, Migration as Policy-fields
Published by: Sarajevo Open Centre
Keywords: gender; women; security; peace; migration; security council; UN; Resolution 1325; implementation; BiH; military; armed forces; police forces; COVID-19;
Summary/Abstract: I have the honour to present this second volume of the “What is the Gender of Security?” series. The OSCE Mission to Bosnia and Herzegovina has partnered with the Sarajevo Open Centre in support of established and emerging practitioners and academics to provide important analysis on the engagement of women in the security sector and other relevant topics pertaining to gender and security. In so doing, we aim to foster synergies among academia, practitioners, and political and security decision-makers, and to highlight the importance of including gender perspectives in all aspects of security. We have partnered with the Sarajevo Open Centre to mark two important anniversaries: 2020 marks 25 years since the end of the conflict in Bosnia and Herzegovina and 20 years since the adoption of the landmark UNSC Resolution 1325 on Women, Peace and Security. The Resolution, unfortunately inspired by the conflicts in BiH and Rwanda in the 1990s, has helped place women’s war and post-war experiences at the forefront of international policy making, especially when it comes to peace negotiations and peace-building, peacekeeping, reconciliation, and reconstruction. Although much remains to be done in the fight to achieve equal rights and opportunities, it is worth recalling the progress achieved so far. To date 83 countries have adopted a National Action Plan for the Implementation of UNSCR 1325, with BiH being one of the first, having adopted its Plan in 2010. I am proud to represent an organization that puts promoting and achieving gender equality within and among participating States, our executive structures and field operations at the forefront of its work. The OSCE adopted its Action Plan for Promotion of Gender Equality in 2004, at a time when gender issues were rarely discussed in international fora. UNSCR 1325 is one of the pillars of our Action Plan and the OSCE Mission to BiH will continue to support BiH partner institutions in promoting its implementation. Since the 1975 Helsinki Final Act (the precursor to the OSCE as we know it today), participating States have recognized the value of a comprehensive approach to security. We remain committed to this approach. Human security cannot be ensured by depending exclusively on democratically-controlled defence and security forces. To achieve sustainable security, access to education and health, economic stability, rule of law, respect for human rights and a stable environment are all crucial. Gender equality and ensuring that youth perspectives play a central role in decision making remains at the heart of the OSCE’s approach. In 2019 the OSCE published research on “Implementing the Women, Peace and Security Agenda in the OSCE Region“ which provides an excellent overview of the implementation of UNSCR 1325. I recommend it to all interested researchers. The world is currently facing a security crisis on a scale more serious than most others in living memory. We are confronted with a pandemic that has forced us all to assume a key role in ensuring the safety and security of our loved ones and ourselves. The spread of the COVID-19 virus has brought into stark relief our global interdependence. It has highlighted the importance of looking out for each other, as well as supporting and protecting the democratic institutions that help our societies function and effectively address crises such as this one. Moreover, it has demonstrated the important role women can and must play as leaders, communicators, researchers and health providers in fighting the pandemic, to the benefit of all. These challenges require us all, whether in government or academia, to continue to collaborate, monitor, analyse, and learn from the experiences we are confronting. It is my sincere hope that, with this second volume, the Sarajevo Open Centre and the OSCE Mission to BiH will together make a valuable contribution to increased knowledge and awareness of many aspects of the UNSCR 1325 implementation.

Women in Legislative, Executive and Judicial Branch of the Government

Behind the Statistics: A Feminist Take on Militarisation

Refugees, Migration and Trafficking in Humans

When the Mask Falls Off – What will be the Gender of the Future?