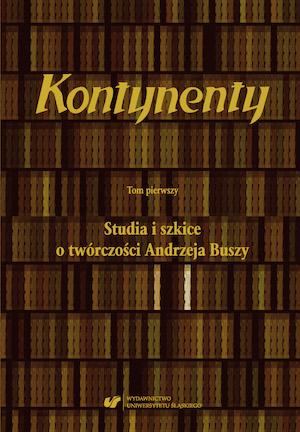 Contributor(s): Marian Kisiel (Editor), Janusz Pasterski (Editor)
Subject(s): Language and Literature Studies, Polish Literature
Published by: Wydawnictwo Uniwersytetu Śląskiego
Keywords: Kontynenty; Andrzej Busza;poet;
Summary/Abstract: The oeuvre of Andrzej Busza is undoubtedly among the most astonishing in Polish contemporary literature. What the foregoing largely stems from is the originality and singularity of his universal world vision, conspicuous poetic diction, and quite characteristic constellation of problems and issues, as well as Busza’s exceptional status as a bilingual writer, being in fact situated “in-between” at least two cultural traditions, but also his complex biography during which he has been meandering through the stage of an émigré, and then an emigrant. A poet, prose writer, translator, literary historian and critic, and a Joseph Conrad scholar – Busza remains one of the last, yet far from being the least, among the pro-independence representatives of Polish post-September 1939 emigration. Born in Kraków in 1938, he fled Poland with his parents on September 17 of the following year, spent the Second World War in the Middle East, to settle in England for the years 1947–1965 where he graduated from University College London with a degree in English. In 1965 he moved to Canada and took a tenure as a lecturer and then a professor of English literature at the University of British Columbia, Vancouver. During the years 1958–1962 he was a member of editorial team of such London-based literary journals as Merkuriusz Polski – Życie Akademickie, Kontynenty – Nowy Merkuriusz, and Kontynenty, in addition to having been a member of the poetic group originating from those journals. He was awarded the following literary prizes: the Kościelski Award (1962), the Władysław and Nella Turzańscy Award (2005), and the Association of Polish Writers Abroad award (2013). Among others, he has published eight books of poetry, a dozen or so short stories, multiple translations of Polish poetry into English (in cooperation with Bogdan Czaykowski, including poems by Miron Białoszewski, Iwaszkiewicz, Jastrun, Miłosz, Wierzyński), and a monograph on the so-called Polish backdrop of Joseph Conrad and the seminal impact of the Polish literary tradition on Conrad, as well as many scholarly articles on the author of Heart of Darkness. […]

Notatki do credo poetyckiego / Notes towards a Poetic credo