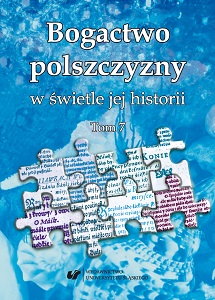 Bogactwo polszczyzny w świetle jej historii. T. 7
The richness of the Polish language in the light of its history. T. 7

Contributor(s): Wioletta Wilczek (Editor)
Subject(s): Language and Literature Studies, Theoretical Linguistics
Published by: Wydawnictwo Uniwersytetu Śląskiego
Keywords: the history of Polish language; Polish linguistics; semantics; conceptualization; orthography
Summary/Abstract: The seventh volume of the highly readable series The Richness of Polish Language in the Light of Its History presents the proceedings of the all-Poland academic conference of students, doctoral candidants, and young doctors (Katowice, 9 November 2016). The authors of articles contained in the presented volume focus on such issues as: 1) the word-formation-, semantics-, and etymology-oriented description of the old (and contemporary) lexis; 2) the analysis of old texts; 3) the issues of orthographic and language correctness. The previously enumerated thematic areas constitute basis for dividing the book into three parts.The first part (Language and Word) contains articles analysing lexis, namely: the semantic development of the verb ciec (‘leak’,’trickle’, ‘drip’ etc.), the lexemes expressing sequence in the Polish language, the terminology used in scientific text from the field of linguistics at the turn of 19th and 20th centuries, the proper names in the works of Julian Tuwim, the outline of name field relating to garments in Upper Silesian dialect. The second part (Language and Text), in turn, includes articles whose authors took it upon themselves to analyze old texts. In particular: the comparison of the text of Rozmyślanie przemyskie with one of probable sources of this apocryph’s Passion part, namely, with Passio Cristi et opera Christi by Jacques de Vitry; the Polish of Jan Andrzej Morsztyn; the persuasiveness of Bolesław Prus’s column writing on the issue of teaching foreign languages; the image of Jewish family presented in a song “Mein jidisze mame”; and lingusitic markers of the employer-employee relationship based on the newspaper Echo Chełmka. The concluding third part (Language and Orthography) inquires into the following problematic: the quiestion of acronyms following the orthographic reform of 1956 and the resultant issues of spelling-related doubts voice by persons writing to language counseling centres for guidance (during the years 1958–1967 and presently). The authors of texts included in the publication prove once more that historical linguistics is a discipline which remains interesting for young language researchers whose scope of study brings us closer not only to the past epochs, but also to the present developtmental tendencies of the Polish language and culture.The present volume is addressed to all persons interested in the history of Polish – linguists, student of humanities (especially of languages) and high school students. The particular research findings and proposed solutions to the problems in question, which can be found in subsequent texts of the publication, may then be utilised during the further studies of language, culture, and humanity.

Problem skrótowców, a przepisy ortograficzne. Reforma pisowni z 1956 roku
(The Question of Acronyms and Rules of Orthography. The 1956 Spelling Reform)

Wątpliwości pisowniane Polaków na tle przemian ortograficznych – analiza porad językowych.
(Spelling Doubts of the Poles in the Context of Changes in Orthography. An Analysis of Pieces of Language Advice.)