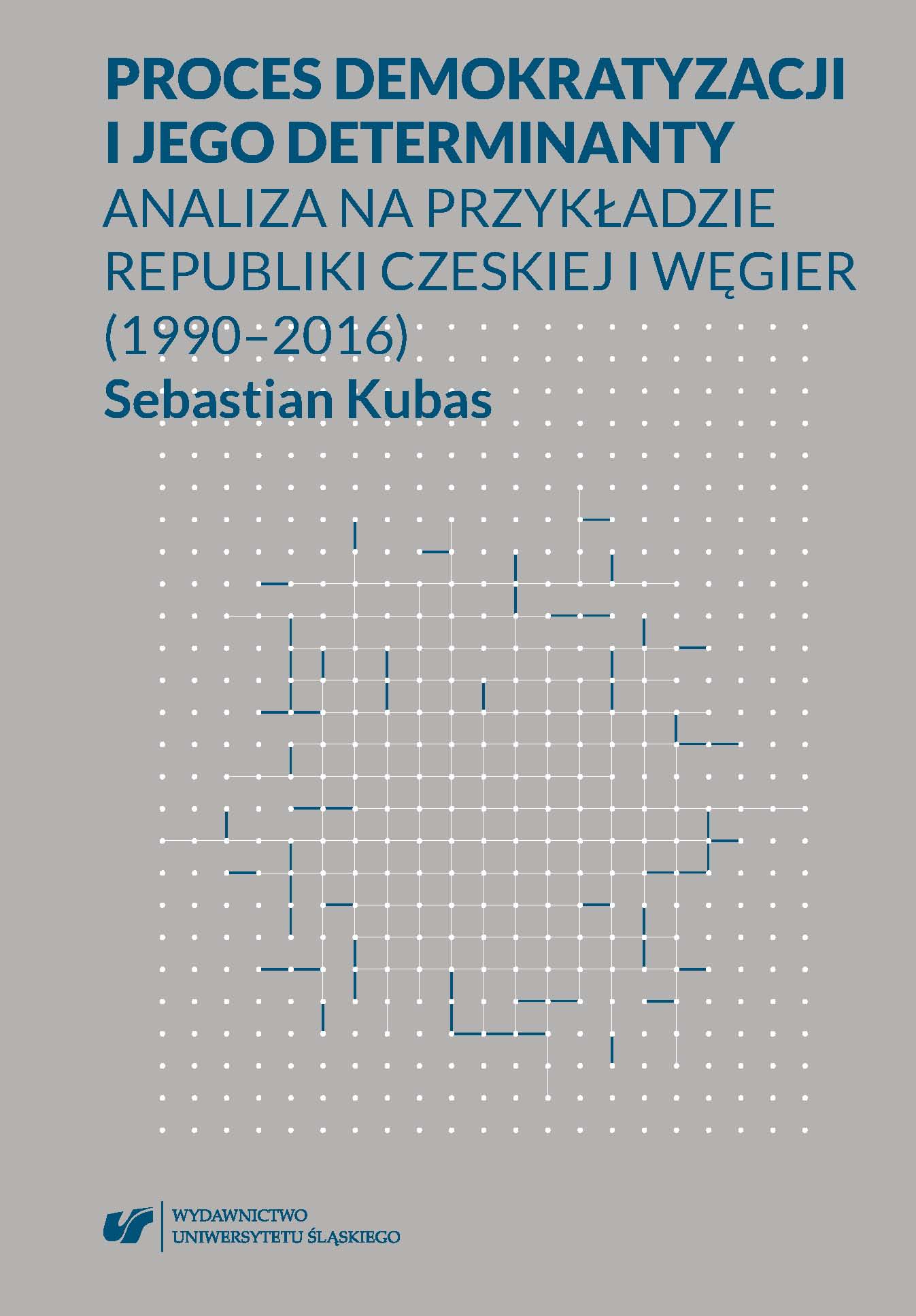 Proces demokratyzacji i jego determinanty. Analiza na przykładzie Republiki Czeskiej i Węgier (1990-2016)
The process of democratisation and its determinants. An analysis based on the example of the Czech Republic and Hungary (1999–2016)

Author(s): Sebastian Kubas
Subject(s): Politics / Political Sciences, Politics, History, Political Theory, Political history, Recent History (1900 till today)
Published by: Wydawnictwo Uniwersytetu Śląskiego
Summary/Abstract: This study is concerned with an analysis of the democratisation processes in two Central European states: the Czech Republic and Hungary in the years 1990–2016. It consists of two parts, with the first one presenting a theoretical analysis of the phenomenon of democracy, the process of democratisation, and the determinants of this process, and the second one focusing on the empirical analysis of the democratisation processes in the Czech Republic and Hungary. Today democracy means that almost all adult citizens participate in the exercising of power. In substantive terms, democracy relies on freedom, equality, and majority rule. At the same time, it is also a regime that rests on specific principles and procedures (the procedural perspective). The process of consolidating democratic values and procedures goes through various stages. First, the erosion of a non-democratic regime involves the transfer of power from former elites to new political actors. Next, during the transition stage, the democratic institutional design is introduced into the political system. Finally, during the consolidation stage, the democratic principles of political life become well-established and democratic values accepted and internalized by the society. The most important determinants of the stage of erosion include: the heritage of the past and the influence of the surroundings. The transition is determined by: the structure of the state, national identity, political elites’ work on the constitution, the relationship between the organs of government, the party system, the electoral system, lustration, decentralisation of power to a system of local authorities, and external factors. The consolidation stage depends on institutional factors on the one hand. such as the final design of the constitution, a stable model of relations between the organs of government, the development of a pluralistic party system, and solidification of the electoral system, and on behavioural factors on the other, such as acceptance and internalisation of democratic values by the society. The process of democratization can be analysed and evaluated with the use of quantitative and qualitative indicators. This study employs indices used by Freedom House, The Economist Intelligence Unit, and The Bertelsmann Foundation.The erosion of the non-democratic regime in Czechoslovakia and Hungary was marked by the transfer of power from political elites to democratic actors. In Hungary, this process was accomplished by negotiations, leading to an agreement signed in the autumn of 1989; in Czechoslovakia, it resulted from the inefficient political elites surrendering the control of the country. The fall of the regime was non-violent. In the initial phase of democratisation, the Czechs could draw on richer experience and more substantial democratic achievements than the Hungarians.During the transition stage, various contributing factors not always influenced the Czech and Hungarian processes of democratisation in the same way. Differences can be seen in the case of such determinants as the structure of the state, national identity, or particular elements of the institutional design. While the Czechs formed their own state in 1992, after 1990 the Hungarians had to redefine their stance towards a several-million Hungarian diaspora in neighbouring countries. The Constitution of the Czech Republic was adopted in 1992, while the Hungarian communist Constitution of 1949 was amended in 1989 and 1990. Both states adopted the parliamentary cabinet system of government, but Hungary opted for the chancellor model. Multi-party systems emerged, but the electoral systems for parliaments were different – with proportional representation in the Czech Republic and mixed in Hungary. The process of lustration was more radical and effective in the Czech Republic. The impact of exogenous determinants was similar in both states because the situation was conducive to the promotion of democracy.The consolidation stage brought changes in the institutional design in both countries. In Hungary, a major restructuring took place after 2010, including the approval of the new Constitution in 2011. Its laws reflect the axiological stance of the legislator, based on conservative and national values rather than on liberal principles that were highlighted before. The party systems have remained pluralistic in both states, but the Czech one is more decentralised. This results in multi-party government coalitions and negatively influences the cabinet stability. In Hungary, the complicated electoral system has been simplified but the mixed formula has been retained. The democracy indices applied in the analysis – The Freedom House index, The Economist Intelligence Unit’s index, and The Bertelsmann Foundation’s index – unanimously indicate that the Czech Republic is more advanced than Hungary in its progress towards consolidated democracy.