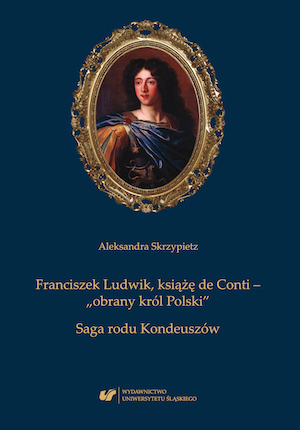 Author(s): Aleksandra Skrzypietz
Subject(s): History, Political history
Published by: Wydawnictwo Uniwersytetu Śląskiego
Summary/Abstract: François Louis de Bourbon, prince of Conti, Louis XIV’s cousin, was an important figure at the royal court. However, especially the behaviour that he exhibited in his youth was a source of numerous problems for him – he implicated himself in homosexual scandals/affairs which were not tolerated by the king; he decided to join, along with his brother, the army which fought against Turkey, and he abused the trust of the monarch; he maintained correspondence which abounded in unfavourable and even derisive remarks about the monarch. All of these things accounted for the fact that he was not in the favour of the Sun King. However, the latter – recognising the position of the relative – did not forbade his presence at the court. François Louis married a cousin, one that also represented the top-ranking court circles, and he did not stain his reputation by marrying an illegitimate daughter of the king – their union was characterized by purity of blood. The prince of Conti also enjoyed great popularity among the representatives of the court society, and he maintained closest relations with the successor to the throne, which must have been a source of concern for the king. Therefore, we do not know whether the decision to appoint the prince as the candidate to the Polish throne after Jan III Sobieski’s death was a token of distinction or punishment for a life of rebellion. The lost election and a number of other life-related failures weakened the position and the popularity of the prince in the court society.The book constitutes an attempt to explain François Louis’s attitude to his candidacy to for the Polish throne – heretofore, one claimed that he was firmly against his candidacy. However, the author does not confine herself to a presentation of a life of “the elected king of Poland”, for she attempts to demonstrate how the life of a pure-blood prince in the second half of the 17th century differed from the activities of a number of generations of his ancestors, who were also rebellious and who were eager to oppose the will of the rulers. Such an approach facilitates the presentation of the differences in the attitudes of royal cousins, the representatives of the de Bourbon family across 150 years – from the moment which preceded the reign of Henry IV until the early 18th century, and also to outline the motivation which directed his actions. François Louis owed his position at the court not only to his background but also to the representatives of the closest milieu of the king, whose makeup was formed personally by the Sun King himself. Therefore, the author intended also to present how the balance of power at the court was maintained by the decisions of the monarch, and also to demonstrate whether these decisions were arbitrary or mitigated (corrected, modulated, moderated) by the interests and influences of various peoples, reasons and political intentions.