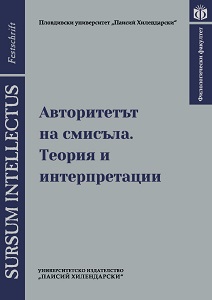 Ferrying a Thinker Across Time and Language

The Myth of Er and the Roots of Literary Polyphony

"Лигите на дявола": Теория на присъстващия
("Las Babas Del Diablo" by Julio Cortazar: A Theory of the One Who Was There)

Да бъдеш, означава да бъдеш за другия или чрез него - за себе си
(Being Means Being for the Sake of the Other and Through That Other - for Oneself)