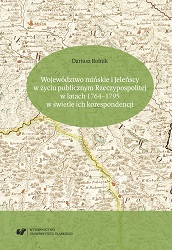 Author(s): Dariusz Rolnik
Subject(s): History, Local History / Microhistory, Social history, Modern Age, 18th Century
Published by: Wydawnictwo Uniwersytetu Śląskiego
Summary/Abstract: The Jeleński family of the Korczak coat of arms had been a well-known family in the history of the Polish-Lithuanian Commonwealth since the second half of the 16th century. During the reign of Stanisław August Poniatowski, however, the family rose to prominence in the Lithuania, holding the Senate seat of the Castellan of Nowogród, which was passed down to the members of the family. It was, in fact, thanks to Stanisław August that Rafał, as well as his brother Gedeon, were raised to the senatorial seat as the first among the Jeleński family. The family was also, or maybe first and foremost, extremely influential in the Minsk Voivodeship, particularly in the Mazyr County, where the various members of the family as well as their relatives and kinsmen held almost absolute power in the local administration. Nonetheless, little has been written about this family’s influence in this area and in the Commonwealth in general — except for biographical notes in the Polish Biographical Dictionary and mentions in books of heraldry. The only mentions included singular instances regarding historic events in the Commonwealth. It should, however, come as no surprise, since the representatives of the family never amounted to anything more than — however influential — supernumeraries on the political stage of the Commonwealth. Nonetheless, due to their mutual interests with the Radziwiłł and Sapieha families, as well as their close ties with many old Lithuanian noble families, such as the Medeksza, Obuchowicz, Kościałkowski, Lenkiewicz, Rdłutowski, Romer, or Wolbek families, in addition to remaining in Stanisław August’s sphere of influence, the Jeleński family aspired to count among the elite of the Lithuanian province, one whose opinion should be taken into consideration.The study is founded upon the analysis of the Jeleński Family Archive, stored at the NationalHistorical Archives of Belarus (NGAB) in Minsk. Thanks to that archive, it has been possible to reconstruct the genealogy of the family as well as indicate its role and influence in the public life of the Minsk Voivodeship during the reign of Stanisław August. The monograph discusses the political engagement of the two most important representatives of the family: Gedeon and Konstanty Ludwik, counted among the elite of their times. They were not only skilled politicians, but also initiators of cultural and scientific development in Lithuania. Both of them betrayed deep interest in the issues of governance and broadly understood political thought — a topic which has been discussed in the first part of this monograph.The monograph consists of five chapters. The first chapter, entitled The Jeleński Family, ItsGenealogy, Multiplication, Connections — A Biographical Perspective, introduces the Jeleński family and provides a biographical perspective. According to all sources, the Jeleński family is descended from the Tatars, and Teodor, the progenitor of the family, came from Lithuania to Poland in 1549 as a knight in the service of Zygmunt August, fighting to defend the Commonwealth, which is probable but impossible to verify. Three important figures were supposed to be descended from Teodor: Paweł, who held the office of the Lithuanian Field Guard, as well as Maciej and Adam, commanders of infantry regiments who made names for themselves in the Livonia, Moscow and Prussia war expeditions. From these three descend the next generations of the Jeleński family, who founded the Jeleński Family Archive and who settled in Dunajczyce and Tucha, which can be regarded as the family nests of the Jeleński family (both were bestowed upon them by Zygmunt III). Moreover, the chapter touches upon the career paths of the selected members of the family and delineates the network of family relationships in the form of longer biographical notes constructed on the basis of the primary sources available in the archive which have been cross-referenced with other studies, books of heraldry and primary sources.The research findings are presented in a graphic form in chapter two, which includes thegenealogy of the Jeleński family. Chapter three: Between the Familia and the King’s Party; Between the Radziwiłł and the Sapieha Families and subsequent Between Politics and the Household serve as an introductory section while at the same time discussing the two most important factors which influenced the family’s position in the public life. The latter issue constitutes the subject of the fifth chapter: The Public Life of the Kingdom of Poland and the Grand Duchy of Lithuania — From the Convocation Sejm (1764) to the Fall of the Polish Statehood (1795). During that time, many members of the Jeleński family remained active in the political sphere, while Gedeon, the most ambitious of the politicians in his family, became the most influential. The members of the family were chosen to be deputies and representatives for more powerful parties; nonetheless, they held no autonomous political power. In 1772, they aligned themselves with Stanisław August. During election sejmiks which elected county and voivodeship officials, the Jeleński family always invoked the good of the Commonwealth, under the motto “for the good of the motherland”. The common good, however, was often perceived by the Jeleński family from the perspective of the prosperity of their own province — both on a smaller scale, i.e. the Mazyr County, and on a grander scale, i.e. the Minsk Voivodeship and the entire Lithuania. That is why their efforts were mostly concentrated on bringing prosperity to the Mazyr County first, followed by the Minsk and Nowogród Voivodeships, and finally the Grand Duchy of Lithuania itself. Sometimes, however, the good of their province and the good of the entire Commonwealthdid not completely align, complicated by the private affairs of the Jeleński family, which bothremained at the forefront of their minds and influenced their subservient political nature. Moreover, all members of the Jeleński family — and Gedeon most of all — were uniquely talented with regard to securing their “rewards.”