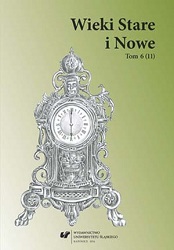 Summary/Abstract: Although magnates living in the former Republic of Poland were criticized after it went into decline, they retained their elite status in Polish society, especially under Russian and Austrian rule. Descendents of aristocracy from the times of Stanisław August reign retained their status in memoires, whereas those who aspired to be associated with magnates met with no appreciation. Such was their treatment given by memoirists dwelling upon Stanisław August times. Less critical approach was taken by memoirists writing in the 19th century and born after 1795, even though they too kept nostalgically reminiscing about those bygone times. The former magnates were thus generally absolved; the 19th century ones, however, still used to be treated in a more severe way. This might have been due to the fact that 19th century memoirists endistanced themselves from the Stanisław August epoch, thus a certain bearing could have been effaced effortlessly. Such potential gentleness was no longer relevant to those magnates who aimed at controlling social as well as public life at that time. Traits typical to magnates, both positive and negative ones, have not changed much. Yet those aspects (very “humane” actually) attributed to them by memoirists, generally resembled those created by their followers. However, having such juxtaposition of traits in mind one can draw a conclusion that although the magnate group grew bigger (at least theoretically) as this status was relatively easy to acquire after the decline of the Polish-Lithuanan Kingdom, especially in South-Eastern Borderlands of the former republic, the number of unfavorable traits grew larger as well, although less concentrated in particular individuals. Nonetheless, there is no place for doubts that by 1830 magnates had been an elite category of nobility, and such was their literary creation depicted by memoirists, including those dwelling upon the Stanisław August times.