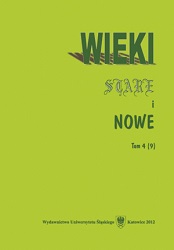 Summary/Abstract: Andrzej Zamoyski was not counted among the circle of the most influential magnates in the Republic of Poland. His figure started to be noticed after 1795, when he was recognized as role model for a good potentate, the opposition to stereotypically negative image of lords that lead the country to collapse. For diary-writers, Andrzej Zamoyski was an example of magnate full of virtues. In that way he was rendered in memoirs written by persons who were witnesses of losing independence by Poland. Their appraisal shows the figure of magnate that was far away form, dominating in diary accounts, negative stereotype on magnate. Nevertheless, it is worth stressing out that beyond the canon of “evil” magnates enumerated by their name, the condemned potentate was usually anonymous. The diary-writers also created positive characters of lords that were to have been role models for contemporaries. Those operations were undertaken keeping the future of captivated nation in mind. The next generation of diary-writers — those remembering Stanislavian Age only vaguely or knowing it vicariously — sustains the tendency to render magnates in above-mentioned manner. Positive heroes of the end of 18th century are raised in value, but Andrzej Zamoyski appears seldom in this context. His place is taken by others — those who were renown during the Nepoleonic period. Amongst those authors the group of “evil” magnates also undergoes metamorphosis, but the canon of „betraitors” seems more steady. Also conspicuous is the will to present the good magnate, who would prove that coexistence of all social groups is possible. Even though the vanishing of the figure of Andrzej Zamoyski form the memories of descendants is understandable, skipping him in the diaries written before 1795 is surprising, as well as his severe judgment of this figure in written accounts form that time that merely mention him. It can be explained by specificity of those texts. They lack moral teaching and reflect the actions of their authors, presenting unambiguously neither the stereotype of “evil” not good magnate.