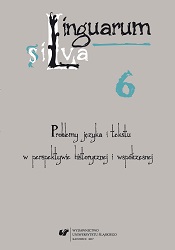 Contributor(s): Barbara Mitrenga (Editor)
Subject(s): Language studies, Language and Literature Studies, Theoretical Linguistics, Philology
Published by: Wydawnictwo Uniwersytetu Śląskiego
Keywords: the Polish language; early and contemporary text; self-promotion; media; genre
Summary/Abstract: The sixth volume of “Linguarum Silva”, entitled The Problems of Language and Text in the Historical and Contemporary Perspective, follows other volumes published so far (Opposition – Contradiction – Contrast in Language and Text (2012), Word – Meaning – Relation in Language and Text (2013), Variability – Stability – Diversity in the Early and Contemporary Polish Language (2014), On the Problems of Language and Text (2015), and Word – Value – Quality in Language and Text (2016)), and it discusses the problems connected both with the history of the Polish language, as well as with the contemporary linguistic issues. The authors in their research focus on early texts, or they subject to analysis contemporary texts of various kinds, such as advertisements, television programmes, or recently occurring new internet genres.The present volume is composed of two parts. The first one (The problems of language and text in a historical perspective) contains three articles that deal with linguistic problems considered on a diachronic level and subject to analysis early texts – the topics of these articles encompass such issues as the emotionality of scientific texts from the turn of the 19th and 20th centuries, the reformation of the Polish orthography in 1956, and the oldest Polish textbooks for teaching the English language.The second part of the volume - The problems of language and text in a contemporary perspective - comprises seven articles which are the studies into the problems connected with contemporary language, as well as academic reflections upon contemporary texts, such as the reportages by Ryszard Kapuściński, social advertisements, selected television programmes, as well as a new genre of internet texts referred to as verbal massacre.The present publication is addressed at all readers interested in the problems of language and text, especially language historians, media experts, and genologists.

O kilku przepisach kodyfikacji polskiej pisowni w 1956 roku: norma a uzus (na podstawie artykułów w „Dzienniku Polskim” z lat 1953 i 1958)
(On the number of a few regulations of the codification of Polish spelling in 1956: the norm and usage (on the basis of articles published in “Dziennik Polski” in 1953 and 1958))

Dlaczego mówimy inaczej? Różnice między biolektami w kontekście badań nad językiem bliźniąt różnej płci
(Why do we speak differently? Differences between biolects in the context of research in the language of twins of different sexes)