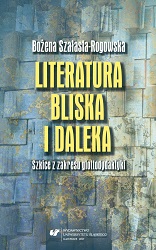 Author(s): Bożena Szałasta-Rogowska
Subject(s): Language studies, Language and Literature Studies, Literary Texts, Foreign languages learning, Philology
Published by: Wydawnictwo Uniwersytetu Śląskiego
Keywords: Literature up Close and from Afar; Glottodidactics; Literature
Summary/Abstract: The texts included in this book result from the author’s discoveries of interestingpoems and short stories, and her willingness to share their attractiveness with other readers, with a special emphasis on the students of Polish as a foreign language. This book, however, is addressed most of all to the educators – mainly those working in the field of glottodidactics – who would like to guide their students in the journey through Polish literature.The book, divided into three chapters, is a collection of articles devoted to practical possibilities of using literature and paintings during foreign language courses. The papers included propose mainly intensive reading practice, that is, reading fiction originally written in Polish. Literature up Close and from Afar. Writings on Glottodidactics is a book that proposes looking at literature both from a distance – since it is appreciated as a reservoir of subjects and cultural heritage – and up close – for the author analyses particular pieces. The propositions for literary glottodidactic meetings are usually based on a specific idea. The ideas include, for instance, exploring literary texts that correspond to paintings (Wordy Images part), the feeling of nostalgia and emigration poetry (Close Feelings from Afar part) or tabooed subjects such as death, old age, or illness (It Is Difficult to Talk part) duringclasses.The first part presents most of all the methodics of working at foreign language courses rooted in paintings and literary texts referring to them that revolve around – on the one hand – the role of particular objects in our lives and – on the other hand – the abstract notion of freedom. The author focuses on the analysis of chosen works of art both from Poland (for instance by Józef Mehoffer, Tytus Czyżewski, or Zbigniew Pronaszko) and from the world (for instance by Pieter Bruegel). Interpretations of Olga Tokarczuk’s short story Szafa and poems by Wisława Szymborska, Grażyna Zambrzycka, and others complement the description of the paintings.The second part of the book shows the possibilities of exploring the potential of poetry during the course of Polish as a foreign language. Classes revolving around nostalgia, identity issues, or problems connected to not feeling at home in a foreign space are exemplified mainly by Polish emigration poems (for example by Bogdan Czaykowski and Marek Kusiba).The final part of the book touches upon difficult, tabooed questions. The author not only points to the need to talk about such delicate and intimate issues as anorexia or the position of elderly people in the society, but also emphasises the significance of cultural differences present in multinational student groups. It is literature that can perform the role of a soothing mediator in this difficult discussion during the foreign language course.