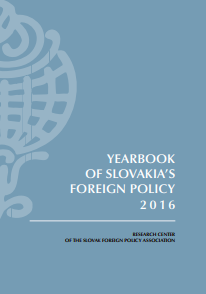 The year of the EU Council Presidency

Western Balkans in the shadow of storms

Bilateral and multilateral context of the Slovakia‘s Eastern policy 2016

A chronology of important events in Slovak foreign policy in 2016

List of the embassies of the EU, NATO, and some other countries