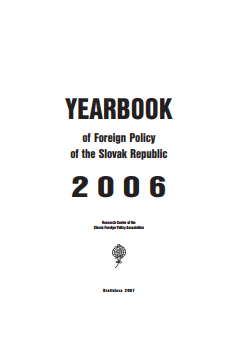 Contributor(s): Peter Brezáni (Editor), Martin Chovančík (Translator), Erik Láštic (Translator), Lucia Klapáčová (Translator), Lucia Najšlová (Translator), Pavol Szalai (Translator), Aneta Világi (Translator)
Subject(s): Politics / Political Sciences, Politics, Social Sciences, Economy, Geography, Regional studies, Supranational / Global Economy, Energy and Environmental Studies, Sociology, Economic policy, Government/Political systems, International relations/trade, Security and defense, Developing nations, Evaluation research, EU-Accession / EU-DEvelopment, Ethnic Minorities Studies
Published by: Research Center of the Slovak Foreign Policy Association (RC SFPA)
Keywords: Slovakia; 2006; international relations; EU; Russia; energy; economy; Ukraine; Visegrad; V4; presidency; evaluation; armed forces; peace missions; NATO; UN; security council; Hungary; Western Balkans; foreign policy; embassy; consulate; treaties;
Summary/Abstract: Year 2006 was indeed exceptional for both Slovakia’s foreign policy and the publication itself. In June, after the general elections, the new government was formed. It was the first time since 1998 the complete change of the political power took place at the same time as the change of foreign policy creator took place. It is also the first time the Yearbook of Foreign Policy of the Slovak Republic assesses and reflects Slovak foreign policy issues other than Dzurinda’s government. Nevertheless, the field of foreign policy was perhaps the only one within which continuity was expected. Furthermore, the Government’s Manifesto does not differ that much in terms of values from the previous government’s manifesto and that was further confirmed by the nomination of an experienced diplomat, Ján Kubiš, for the position of foreign minister. However, certain dissonance between the rhetoric and implementation has been provoking the discussion from the very beginning. At the beginning of April 2007, the Research Center of the Slovak Foreign Policy Association (RC SFPA) attempted for the first time to assess the foreign policy direction of Slovakia after the new government came into power. RC SFPA organized its Annual Review Conference on Foreign Policy named Continuities and Changes in Slovakia’s Foreign Policy. The name of the conference itself, somehow stemming from the post-election discourse, caused quite a vivid discussion. However, the individual presenters constantly substituted and by or in the title. This also might have contributed to our decision to continue with the discussion on the pages of Yearbook of Foreign Policy of the Slovak Republic 2006 in broader scope. The book analyzes the 2006 foreign policy within three main fields – EU, security policy, and regional and bilateral agenda. The first part traditionally focuses on Slovakia’s performance in the EU. It opens with the contribution of Erik Láštic from Comenius University’s Faculty of Arts. In his paper, he analyzes the institutional background of Slovakia in the EU. Since this topic was not discussed in previous editions, the text goes beyond the framework of 2006. The article of RC SFPA’s research fellow Aneta Világi reflects the domestic (non)debate on the issue of the Treaty Establishing the Constitution for Europe. The RC SFPA director and head of its Eastern Europe research program Alexander Duleba, based on his analysis of the EU Eastern Policy, recommends the establishment of two-level strategy and bridging ENP with Russia policy The second part also partially resembles the last year’s structure with its two analyses focusing on the key security policy agendas, i.e. Slovakia’s performance within the UN Security Council and NATO. The former was elaborated by the head of RC SFPA’s International Security research program Ivo Samson. His detailed analysis focuses on the scope of SR’s activities in the UN SC, Slovakia’s participation in creating of resolutions and voting, the presidency itself as well as the key agenda of the security sector reform. The transformation and developments within the NATO are surveyed by Matúš Korba of Center for Security Studies, a Bratislava-based NGO. In his study, included the analysis of Slovakia’s performance in the Alliance, the participation in the crisis management missions or the challenges the SR will face. Unlike previous years, the 2006 Yearbook has a part dealing with regional and bilateral relations, i.e. it focuses on the priorities and tools of Slovakia’s foreign policy. The chapter is opened by the article on Slovak-Hungarian relations which are, according to the author, full of ‘media convenient’ topics. The paper was written by Kálmán Petőcz of Forum Minority Research Institute, a Šamorín-based NGO. Similarly discussed and ‘convenient’ topic was also energy policy and security. Independent analyst, Karel Hirman, focuses his analysis on 2006 Russian-Ukrainian gas dispute, new Russian strategy and its impact on Slovakia. Slovakia’s presidency over the V4 dominated the regional agenda even though the functioning of V4 was to a large extent influenced by the domestic political developments in its member states. This topic was elaborated by Juraj Marušiak of Institute of Political Science of Slovak Academy of Science. Milan Šagát of Bratislavabased Pontis Foundation prepared a contribution on a complex and complicated issue of Slovakia’s policy towards the Western Balkans. In his paper, he stresses the fact that the folowing period will be of crucial importance for Slovakia’s policy and that it needs to be more diversified and better-balanced towards the whole region. Three authors Marián Čaučík, Zuzana Krátka and Ľudmila Pastorová focused on the issue of the most important bilateral foreign policy tool of Slovakia in 2006 – the development assistance. Their contribution deals with the activities of Slovak organizations within sectoral and territorial priorities as well as with the institutional and legislative changes of Slovak ODA. Traditionally, the Yearbook includes annexes such as the chronology of the most important events in the Slovak foreign policy in 2006, selected political documents and other information (e.g. the structure and representatives of the MFA SR, a list of diplomatic missions and representatives of SR abroad, the SR diplomatic bodies, army missions abroad etc.). It is up to the reader to decide whether there is continuity or discontinuity in Slovakia’s foreign policy. However, I strongly believe that all texts will contribute to the debate on further direction of Slovakia’s foreign policy and that the publication will find its readers.

Slovakia in the EU

Eastern Policy of the EU under the Presidencies of Finland and Germany: Shifting Agendas and Instruments

The Performance of the SR in the UN Security Council

Energy as the International Security Factor

Slovakia and Development Assistance in 2006

List of Treaties Concluded between Slovakia and Other Countries in 2006

List of the Embassies EU, NATO countries and Some Other Countries