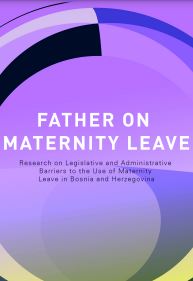 Author(s): Amina Dizdar, Delila Hasanbegović
Contributor(s): Darko Pandurević (Editor), Emina Bošnjak (Editor), Tarik Vukas (Translator)
Subject(s): Gender Studies, Public Administration, Family and social welfare, Socio-Economic Research, Labour and Social Security Law
Published by: Sarajevo Open Centre
Keywords: BiH; maternity leave; administration; legislation; barriers; fathers;
Summary/Abstract: The aim of this research is to determine whether fathers use maternity leave and to what extent, and whether there is space for improving the laws governing this area, as well as public policies that would increase the participation of men in family life. The ultimate goal is to increase the participation of women in the labor market by amending and applying the appropriate provisions of the current laws and implementing public policies aimed at promoting the right for both parents to use maternity leave. In the first part of the research, we present the legal framework for regulating maternity leave, that is, we analyze the most important provisions of the Labor Law in B&H Institutions, FB&H Labor Law, RS Labor Law and District Brčko of B&H Labor Law, Law on Social Protection, Protection of Civilian Victims of War and Protection of Families with Children (Federation of Bosnia and Herzegovina) i.e. the laws on child protection (Republika Srpska and District Brčko), as well as accompanying bylaws. The second part contains basic information on the administrative procedures for using maternity leave, on the number of fathers who submitted a request for compensation instead of salary during maternity leave, and on the competent bodies for deciding on this issue. The research has shown that only 0.36% of fathers exercised the right to compensation instead of salary during maternity leave. In the third part, we analyzed the responses of 500 fathers who were surveyed by the public opinion polling agency and who had a child between 2016 and today,1 as well as the responses of eight fathers who used maternity leave during this period, and who were interviewed in focus groups. We chose this period because it was only in 2016 that this right was guaranteed to fathers as well. More than half (57.8%) of the surveyed fathers responded that they were not familiar with the right to use maternity leave. 73.4% of fathers said that they would have used maternity leave if they had known that this possibility existed. 28.8% of fathers were informed about this right by their employers. Out of the total number of fathers who did not use maternity leave, 49.7% of fathers did not know they could exercise this right, i.e. they were not sufficiently informed about the possibilities. 11.2% of fathers believe they do not need maternity leave because women are the ones who take care of children. 6.3% of fathers believe that no one exercises this right. 55.2% of fathers believe that the term parental leave is more appropriate compared to the term maternity leave, which is currently being used in labor laws. In the end, based on the collected data and findings obtained, we made recommendations, which the state should apply in order to enable both fathers and mothers to exercise this right equally. Given that a large number of fathers (more than half) stated they did not know about the possibility of using maternity leave, it is necessary to implement appropriate campaigns to raise awareness, but also to require employers to introduce the employees with their rights. In addition, the laws don't provide the same type of protection to fathers taking maternity leave as for mothers, and it is necessary to amend labor laws and other regulations that govern this area so that fathers also receive compensation while using maternity leave, have the right to leave in case of stillbirth, and have a guaranteed period of maternity leave that cannot be waived or transferred to the mother, in accordance with the European Union Directive on Work-Life Balance for Parents and Carers.