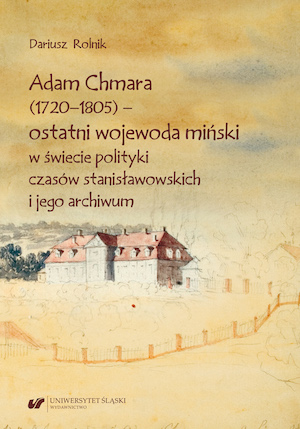 Author(s): Dariusz Rolnik
Subject(s): History, 18th Century, 19th Century
Published by: Wydawnictwo Uniwersytetu Śląskiego
Keywords: Lithuania; Adam Chmara; the nobility of Stanisław August's time; family archives;the Sapieha family;
Summary/Abstract: The biography paints the portrait of Adam Chmara across different walks of life, as a nobleman anda citizen who aspired to count himself among the powerful and mighty Polish statesmen duringthe reign of Stanisław II Augustus. Politically, he can be counted among the staunch reformers ofthe Polish-Lithuanian Commonwealth; privately, he was a caring husband and father, and a benevolentmaster who on the one hand valued profit, but who valued his subordinates as well; a kind,generous and polite man. Theoretically, then, he presents a picture of a man virtually devoid offlaws; nonetheless, a lot of the hypotheses and suppositions that appear here are not the fault ofthe author but rather the subject of this biography. One thing which, in theory, should surprisethe reader with regard to the figure of Chmara is his talent for adaptation to new, unforeseencircumstances, which seems to be his dominant feature; but is it just his individual characteristic?Jarosław Czubaty wrote in detail about the principle of two consciences among the citizens of theCommonwealth, but is it not merely a reflection of nearly the entire generation of intellectual elitesof the Enlightenment persuasion, which emerged during the reign of Stanisław II Augustus? Oneof their most fundamental principles was the professed love for the motherland and its subjects,as well as the acknowledgment of the necessity of the betterment of people’s social and materialcircumstances, accompanied by the complete lack of any kind of determination or sacrifice madein order to achieve these goals. This, of course, is merely a hypothesis; however, the fear of takingresponsibility for the fate of the country — whose origin is difficult to determine — is a rathercurious phenomenon. It could be argued, of course, that it originated in the desire to protect thenobles’ estates, their families, or other reasons, but that alone cannot account for everything. Onthe one hand, then, the phenomenon could be attributed to particular reactions to the unfoldingevents, but on the other hand, it could be also attributed to this Enlightenment mindset whichconstituted the guide for people’s behavior; in a world governed by reason, pragmatism and logicrule over everything else, and it is only once we acknowledge that fact that we can discuss thejustification — the principle of two consciences.