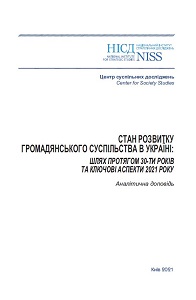 Author(s): Yu. A. Tyshchenko, O. M. Litvinenko, O. Yu. Mikhailova, Yu. B. Kaplan, D. M. Gorelov, Oleksandr Kornievskyy, G. O. Paliy, N.I. Pelivanova
Subject(s): Civil Society, Governance, Public Administration, Social development
Published by: НІСД Національний інститут стратегічних досліджень
Keywords: democratic development of Ukraine;
Summary/Abstract: During the thirty years of independence, the civil society of Ukraine has overcome a considerable path of formation and development. From the youth movements, trade unions and political associations of the 1990s, it has transformed into an influential actor in key socio-political processes. // Active centers of civil society, organized and spontaneous, influenced the foreign and domestic political trajectory of Ukraine's development, warning against returning to the circle of post-Soviet countries with authoritarian regimes. There was widespread public resistance in 2004-2005, during the Orange Revolution. The end of 2013 and the beginning of 2014 were also marked by a high level of public activity. With the beginning of the Russian military aggression against Ukraine and its occupation of the Autonomous Republic of Crimea and Sevastopol and parts of Donetsk and Luhansk regions, the birth of a powerful volunteer, philanthropic and voluntary movement significantly expanded the influence of civil society on security. New movements and initiatives of citizens have radically changed the established landscape of civil society in Ukraine, and volunteer and veteran movements have become a powerful segment in the overall structure of civil society and actively interact with public authorities. The inviolability of Ukraine's foreign policy European and Euro-Atlantic prospects, the fundamental requirements of domestic political development (democracy, rule of law, free elections, etc.) is ensured, in particular, by the stability of the active segment of civil society.