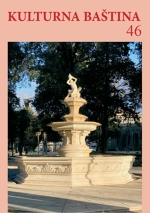 Summary/Abstract: Following the Great War, ten mayors were appointed in Split, the city in the State of Slovenes, Croats and Serbs, then in the Kingdom of Slovenes, Croats and Serbs and, finally, in the Kingdom of Yugoslavia. The first mayor was Ivo Tartaglia, and the last one was Josip Brkić. Mihovil Kargotić was in office in the period 1933-1938. Kargotić was born on June 11, 1891 in Imotski. His father, Lujo, was a public notary at the time. After a few years, the family, that originated in Vis, moved to Split, where Mihovil finished high school and then decided to study at technical colleges in Vienna, Brno and Prague. Just before the beginning of the First World War, he graduated in technical sciences. To avoid serving in the Austrian army, he moved to Switzerland where he spent four years in Zurich attending the technical high school there. After the war had ended, he passed the engineering exams in Paris. Since then, he had been in the permanent professional and administrative service in Split. Data on his professional work are very scarce. In the very beginning of his career, together with engineers Lovro Krstulović and Vjekoslav Ivanišević, he ran a construction company. According to some scanty information, he participated in the construction of a three-floor residential and commercial building on the north side of the central farmer market – Pazar – in Split. The family house in Firule, in Split, where he lived, may have been his creation. Even after he was elected mayor in 1933, he was active professionally for some time. He was a member of the Split branch of the Association of Yugoslav Engineers and Architects. Kargotić was the mayor of Split until May 19, 1938. Then, Mirko Buić was elected. His tenure took place in very complex economic and political circumstances around the world. The state was under the dictatorship rule that was formally abolished in 1931. However, only the regime national party was allowed to operate. After the assassination of King Alexander in 1934, they were allowed to work, so new elections were called the following year. Thus, the dictatorship really ended and the so-called compromise government was established. During all that time, Split was part of the Littoral Banovina with Josip Jablanović as its governor - ban. The situation was chaotic. When Kargotić took office, Split had almost 40,000 inhabitants. He regularly attended and chaired city council sessions. He participated in discussions and informed members on specific issues. He was, at the same time, the director of the municipal electric companies authority. His daily responsibilities were numerous and varied. He participated in events during frequent visits to foreign warships, French, English, Romanian and Turkish. He attended receptions and meetings with state and foreign dignitaries. Since Kargotić was a prominent construction expert, he was actively involved in urban planning. He was a member of both the Chamber of Engineers and the Society of Engineers. He was a member of the tender committee appointed to select the best solution for the construction of the Orthodox church in 1935. He participated in resolving the issue of the construction of the Banovina building, which was the subject of fierce controversy in public. While Kargotić was in office, several important public buildings were built in addition to the private ones. Investors were different. The main one was the state which, over a number of years, invested in several construction projects: the infectious disease ward of the new hospital in Firule (1933), the employment office building in Zrinjsko-frankopanska street (1935), public and customs warehouses in the port and the post office building in Pistura (1938). In order to accelerate the construction process and secure funds, Kargotić went to Belgrade on several occasions to negotiate with ministers. At the time, the Governor’s Palace on the West Coast was under construction as well as other significant projects, such as the expansion of the Dominican monastery in the central farmer market, the construction of both an Orthodox church and a new church of Our Lady of Health in Dobri. In 1938, an unexpected turnaround occurred. On May 18, Kargotić handed in his notice. The true reasons were never revealed to the public. All Kargotić stated was that the amount of time he had worked for the city was quite enough. On May 19, at his own initiative, the City Council held a meeting, which was also attended by Vice President Duje Ivanišević. Kargotić informed them that he had resigned. He thanked them for their joint action and recommended that they appointed the new president. However, the councilors showed solidarity: they all resigned, except Peter Luger. The next day, Duje Ivanišević submitted his resignation to the governor. The participants of the meeting did not give any explanations about the reasons to the journalists. The reasons may have been very serious. Councilors Andrija Zelić from Solin, Luka Draganja and Ante Plosnić from Stobreč also resigned. The Governor - Ban accepted the resignation. The news provoked lively comments in the city, especially about the reasons. Prospective candidates for their positions were also discussed. Information about Kargotić, after he resigned as mayor, is scarce. He was a member of the tender committee for the construction of the courthouse in 1939. 28 tenders were submitted. The results were poor. The construction of the new building did not take place then. Mihovil Kargotić survived the Second World War. He died in Split on April 7, 1987. He was buried in Vis on April 9 in the Prirovo cemetery.