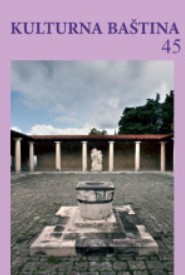 Summary/Abstract: Sculpture was Ivan Meštrović’s primary vocation, however, he was also interested in architecture. Numerous preserved drafts and projects of buildings which he worked on are a source of his architectural work, and he realized approximately fifteen of all the planned projects. He would usually draw sketches and present a basic idea, which was further technically elaborated upon by other architects he collaborated with, such as Viktor Kovačić, Lavoslav Horvat, Drago Ibler, and others, but mostly Harold Bilinić. In these joint ventures these architects incorporated some of their ideas, but it is rather difficult to ascertain a percentage of each individual in the joint projects. Bilinić was Meštrović’s most important collaborator, but he also worked independently. The two of them met early on, when Meštrović just arrived in Split as a young apprentice in the stone-masonry workshop of Bilinić’s father Pavao. Bilinić and Meštrović remained close until Meštrović’s death in 1962. Bilinić participated in almost all of Meštrović’s architectural project, and has probably greatly contributed to the classicist form of the buildings they designed together. Indicators of this are Bilinić’s drawings of Roman monuments found in his estate. There is no doubt that Bilinić was greatly interested in and well acquainted with the architecture of Antiquity. Meštrović was rather drawn to the classicism of Antiquity which is in some cases more or less noticeable in the architectural structure and décor. An example of this is the Kosovo Temple which Meštrović designed while having in mind the central part of the Diocletian Palace in Split, with the imperial mausoleum and Peristyle above it. He completed a small-scale model in 1912, but the idea was never realized. His family residence building and atelier in Zagreb were completed in 1924. The building’s atrium features Tuscany-style columns. The next projects included the church of Christ the King in the Zagreb neighborhood of Trnje and the Gallery of the Yugoslav Academy of Arts and Sciences. The House of Fine Arts in Zagreb is a particularly important project. The object was built in 1938. The concept of a circular building with a porch resting on rectangular pillars is distinctly a classical one. The Monument to the Unknown Hero is a WWI memorial built on top of Avala Mountain near Belgrade. This sarcophagus-shaped memorial, clearly influenced by classical architectural elements, was completed in 1938. In the city of Split Meštrović collaborated with architect Drago Ibler on a joint blueprint for the Governor’s Palace, whose façade was decorated with Ionic columns rising through multiple floors. Prior to WWI, he completed, in the Split neighborhoor of Meje, his Gallery and Kaštelet, with a church and a courtyard surrounded by a porch resting on Doric columns, all spaces designed as galleries for the display of his artwork.