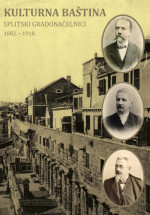 Summary/Abstract: The distinguished mayor of Split, Ivan Manger, was born in Split on 30th May 1841. His father, Mateo, was a salesman, and his mother, Marija Kundid, was a seamstress. He graduated law from Padua University in 1866, and, in 1870, married the daughter of Anton de Paitoni and Katarina Nakić, Luigia Paitoni. The were married by Petar Manger, who was a brotherin-law of the mayor of Zadar and leader of the Autonomist Party, Luigi Ziliotti. Manger was a fervent advocate of national revival movement and, thus, as an active member of the People’s Party, constantly in conflict with the members of the Autonomist Party. In 1893, he was appointed as the first assessor of the Municipality. He often presided over the meetings of the municipal council in mayor’s absence. He was on the board of a number of patriotic and philanthropic associations, such as Javna dobrotvornost and Slavjanski napredak. Those were the years of significant events: the monument to the famous poet, Ivan Gundulić, was uncovered and the new Municipal Theatre opened its doors to the public. Pope Leo XIII celebrated the golden jubilee of his ordination. To honour the jubilee, the municipal representatives and Ivan Manger as assessor, paid an official visit to Diocesan Bishop, Filip Frane Nakić. The representatives thus showed loyalty to the Holy See and the Pope. Another significant patriotic event in 1893 was the transfer of bones of count Janko Drašković, who was the founder of Matica Hrvatska, from Radgana to Mirogoj cemetery in Zagreb. Telegrams were sent from Split to honour the event. Ivan Manger was appointed mayor after Gajo Bulat resigned from the position and was thus supposed to perform many ceremonial duties. One of them was the official meeting with count Jan Harrach and the governor of Dalmatia, Emil Rhonfeld. Count Harrach was a fervent advocate of Dalmatian prosperity. In the course of 1896, many prominent public figures passed away. One of them was Miho Klaić, the leader of the People’s Party and founder of Narodni list. He was also Member of the Diet of Dalmatia. Manger served two terms as Member of the Diet of Dalmatia. As a member, he was rather restrained but often supported different views by other members. In this light, he emphasized the importance of the production of cement in Dalmatia during one of the sessions. In addition, Manger worked on the improvement of health care in Split. He served as mayor in a prolific period of the urban history of Split. In that period, the first regular telephone line was installed and grammar school for girls opened its doors. It was also a period of intensive building and many significant public buildings were constructed, such as Bishop’s Palace, Croatian Lodge, Agricultural Vocational School, grammar school, et al. Manger retired from the mayoral position and worked as a lawyer. He lived to see both the chaos and destruction of the Great War and the dawn of the new era.