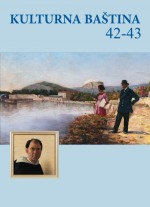 Summary/Abstract: The early 20th century was marked by increased tensions among the great powers. The conflict of interest between Austria-Hungary and the Kingdom of Serbia resulted in the assassination of the Archduke Franz Ferdinand and his wife in Sarajevo on 28th June 1914, which was the spark that kindled the Great War. Dalmatia, at the time, was a faraway Habsburg maritime province. Its inhabitans were rather shocked by the fact that the war was about to start and yet hoped for its swift resolution. Young men who had been conscripted from all over the province went to the battlefields in a joyful and brave manner. Most of them joined the 22nd and 37th battalions and fought on several different battlefields. Many of them never returned home. Local newspapers would regularly provide information on the captured, the wounded and the deceased, which they received from the authorities in Vienna. Since Dalmatia was not that near the battlefields, there were not any major military operations there. A strong French fleet sailed into the Adriatic Sea to prevent the Austrian fleet from setting sail for the Mediterranean Sea. The enemy ships would only attack selected military objects. The Central Powers, that is the Austro-Hungarian and German forces, were initially successful: they broke into the Serbian territory, which resulted in the fall of Belgrade on 2nd December. Celebrations were regularly held all around Dalmatia to mark those victories. The damaging side effects of the war soon appeared: food shortages and other deprivations. A number of humanitarian concerts and other related events were held to help raise money for the needy. The Austrian Red Cross provided assistance as well. The Dalmatian division of the Red Cross launched an appeal to the citizens to offer help to those in need. Soon after the assassination and the declaration of war, the authorities introduced severe measures against all those who supported Slavism. Many renowned intellectuals and politicians were, thus, interned. Many cultural and sporting associations were abolished. Reading rooms were closed. Among them were cultural associations in Šibenik, such as Srpska čitaonica, Srpsko pjevačko društvo Srbija, Hrvatsko muzikalno društvo Kola, Hrvatska sokolska župa Krešimir, et al. The Sokol associations in Split, Omiš, Kaštel Novi and Trogir were also forced to close their doors. The official authorities exerted strict supervision over the local ones: those who were considered unfit on account of their political views were dismissed and replaced by new state governors. Those changes occured in every city in Dalmatia: Split, Dubrovnik, Hvar, Stari Grad, Pag, Kistanje, Kotor, et al. Local newspapers, such as democratic Sloboda and Pučka sloboda and nationalist Zastava from Split; Crvena Hrvatska, Dubrovnik, Srpska zora from Dubrovnik, were forbidden to publish until further notice by the proclamation issued by the official Dalmatian Authority. Chief editor of the daily Hrvatske riječi from Šibenik, Mr Matošić, was interned. All the articles were severely censored prior to publication and the credibility of the information that they offered was questionable. Correspondence between soldiers and their loved ones was also subjected to the official scrutiny by censors. Food was supplied from the more fertile continental part of the province. The governor and chambers of commerce were in charge of food supply, which, at the very beginning of war, was not an issue. However, as the war progressed and many young men, who had previously worked the fields, went to war, some food products became scarce and had to be rationed. As the war progressed, the social and economic conditions in the entire state started to deteriorate. Therefore to finance the ongoing cost of war and protect the stability of financial sector, the Minister of Finance followed the Imperial order and ordered the issue of the war loan. The war bonds, which paid out a rate of interest of 5.5%, were issued in the period 16th – 24th November 1914. The war had a negative effect on educational system. Since some teachers and students were conscripted, the Minister of Education, Mr Hussarek, decided to postpone the start of the school year. Commercial school in Split began on 16th September; grammar school and nautical school in Dubrovnik began on 9th November. Grammar school in Šibenik began on 19th October 1914. The protection of cultural heritage was one of the major concerns. Thorugh procedures of their protection were implemented in accordance with the Hague Convention from 1907. The construction sector faced stagnation before and at the onset of war, with all its activities reduced to occasional restoration of church and school buildings. Although marked by discomfort and trouble to a certain extent, the first year of the Great War passed tolerably well in Dalmatia, when compared to horrors experienced in other regions. The second year, however, would be much more difficult to endure.