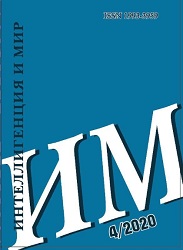 Summary/Abstract: The article analyzes a unique empirical material obtained in the course of a sociological study, the purpose of which is to reveal the content of the concept «intelligentsia» as it is comprehended by modern Russian youth. The author studies the correlation of this content with the traditional understanding of the intelligentsia, presented in the leading Russian sociological approaches: socio-economic, cultural, social-ethical, and others. The main method of collecting primary sociological in-formation is a questionnaire survey, which allows respondents to rank psychological, cognitive, sociorole, moral and ethical markers of the intelligentsia, as well as the markers that characterize the overall level of culture and education of a person. It is revealed that as the main ones, respondents use blocks that cover cognitive characteristics and markers of the general level of culture and upbringing. Moral, ethical and psychological properties and qualities are taken into account to a much lesser extent, while traditional social markers (belonging to a certain social stratum/group/class, profession/occupation/type of occupation, social attitudes and motivation, etc.) remain the outsiders of the sample. Based on the obtained data, a collective image of the intelligentsia through the eyes of modern Russian youth is formed. An opinion about the relevance of the resulting image to almost any person who has received a decent upbringing and education (regardless of the country of residence of this person, their civil position, moral and psychological qualities and characteristics, etc.) is discussed. It is concluded that modern Russian youth, who are not familiar with the etymology and classical interpretations of the concept of «intelligentsia », «dissolves» it in a close, but not identical concept of «intelligence».