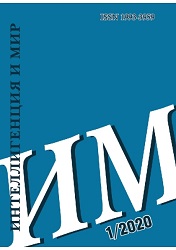 Summary/Abstract: The article deals with the socio-psychological features of the perception of personality and creative heritage of Vladimir Vysotsky by the representatives of the new emerging generation of the domestic intelligentsia — students. It analyzes the reasons for the phenomenal popularity of the works of Vladimir Vysotsky, public and research interest remained consistently high for the last half century (transforming into the particular scientific section — so-called “Vysotsky studies”). It is revealed how important the creative heritage of the famous Soviet poet and bard is in the conditions of a new, radically changed, in comparison with the time in which V. Vysotsky lived and worked, socio-political reality. By selective testing of students of higher educational establishments in Ivanovo examined is the knowledge of young people about the biography and works of Vladimir Vysotsky, identified are the sources from which to extract information about them, it turns out the presence or absence of interest of modern students to the works of the poet. These tests reveal obvious gaps in the field of school education that do not allow the younger generation to fully appreciate the creative heritage of Vladimir Vysotsky, that of course, is already a classic of Russian poetry. Shown is the relationship of perception of a creative heritage of Vladimir Vysotsky and personal motivation attitudes of generation Z. It is revealed that the realities and challenges of the current day, which determine the attitudes and principles of modern youth, are no longer consistent with the meanings and messages that V. Vysotsky put into his works. Modern students do not want to see themselves as passive victims of the regime and circumstances (and these, in their opinion, are the heroes of most of V. Vysotsky’s works), their goal is self-assertion, personal achievements and success.