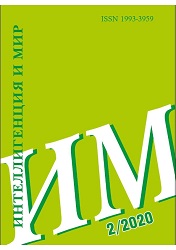 Summary/Abstract: The relevance of the study of helping behavior is caused by the fact that the social environment of the modern world is becoming increasingly competitive. In such circumstances, it is particularly important to develop personal strategies that allow painlessly adapt to the changing conditions of social life, contributing to the preservation of the integrity and individuality of the subject. The very logic of the movement of psychological science determines the study of phenomena such as altruistic behavior, that are the mechanisms of its functioning, patterns of formation and what role it has in the life of the subject of social interaction. Each person, making his life choice, comes from the foundations of his own inner world. In this regard, the study of the problems of altruism in social psychology becomes a particularly important task. The aim of the work was to study the socio-psychological characteristics of the modern Russian intelligentsia associated with its readiness for altruistic interaction. The objectives were to study the representation of altruism as a sociopsychological phenomenon among the representatives of the modern intelligentsia. Consideration of the place of altruistic motivation and readiness of its actualization among intellectuals in different conditions. Using a questionnaire, as well as a battery of psychodiagnostic techniques processed using statistical procedures (quantitative, correlation, factor and regression analysis), it was found that there is a relationship of readiness to help behavior with the personal psychological characteristics of intelligentsia representatives, taking into account belonging to the age and sex socio-demographic groups. It is determined that the potential of helping behavior is associated with the individual experience of family interaction. The potential conditions under which altruistic motivation of various intelligentsia representatives can be actualized are revealed. The basic formal-dynamic characteristics of altruism as a relatively independent socio-psychological phenomena are determined.