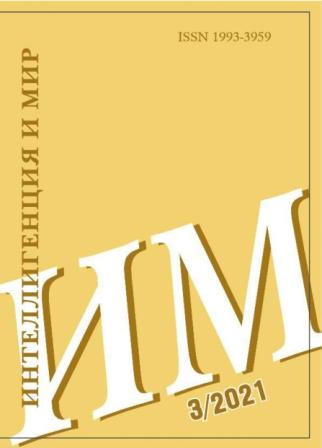 Summary/Abstract: The article presents the results of a socio-psychological study of the relationship between the religiosity of representatives of the scientific intelligentsia and their psychological characteristics, such as the level of anxiety, aggressiveness, conflict, the level of empathy, altruism, conscientiousness, Machiavellianism, value structure (terminal and instrumental values). The article considers religiosity as a complex socio-psychological phenomenon, taking into account its social role and influence on various personal characteristics of intellectuals. As a result of the analysis of data from a sample survey of 150 researchers of the Central Federal District universities (Ivanovo, Kostroma, Vladimir, Nizhny Novgorod, Yaroslavl regions), aimed at identifying the objective and subjective attitude of representatives of the scientific intelligentsia to religious faith and processing information obtained from testing respondents on the Spielberger situational anxiety scale, which diagnoses the level of reactive and personal anxiety, it was found that under the influence of religious beliefs, representatives of the intelligentsia undergo personal changes. The nature of the origin of religious feeling is rooted in the unconscious sphere of the individual. The formation and development of religiosity is connected with the social existence of a person and occurs through the interiorization of religious ideas. Taking into account that religion as a socio-psychological phenomenon performs many functions both in the life of an individual and in the life of society as a whole, it is determined that religion is able to form the social consciousness of each particular individual representing the intelligentsia. As a phenomenon of social life, religion takes part in the formation of society, social norms, morals and values. At the same time, religious beliefs are an integral part of every person's personality. The paper shows that the strength of religious beliefs is closely related and depends on the personal characteristics of a person: emotional, communicative, value, and others, and such personal characteristics as conformity, subordination, externality, and a tendency to loneliness increase the degree and strength of interiorization of religious beliefs, which lead to a decrease in anxiety, Machiavellianism, conflict, aggression, and increased empathy, altruism, and conscientiousness.