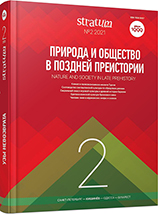 Summary/Abstract: Usatovo culture settlement of Mayaki was discovered in 1961. The site is located on the southeastern outskirts of the village of Mayaki, on the plateau of the Dniester left bank. The first studies were carried out by V. G. Zbenovich on an area of ca. 500 m2. It was found out that the site is a system of ditches of different sizes, filled with cultural remains.The author publishes the flint collection (3683 pieces) from Mayaki settlement (studies led by V. G. Petrenko in 1990s — 2000s).The primary flint splitting and production of secondary retouched tools took place on the area of the site. This is evidenced by a fairly large number of fragments, core spalls, cores and production waste in the form of various flakes, scales, as well as secondary retouched finished products.The collection contains flint pebbles, cores, flakes, blades, production wastes, scrapers, trapeziums, Kukrek insert, points, retouched blades, flakes, fragments and other tools.Some tools turned out to belong to the earlier archaeological eras. They were picked up somewhere by the Eneolithic inhabitants of the settlement.At the Usatovo culture settlement of Usatovo-Bolshoi Kuyalnik, quite a lot of tools were produced from imported flint. On the contrary, at Mayaki settlement, based on the examined materials, practically all tools, with some exceptions, were produced from local raw materials.