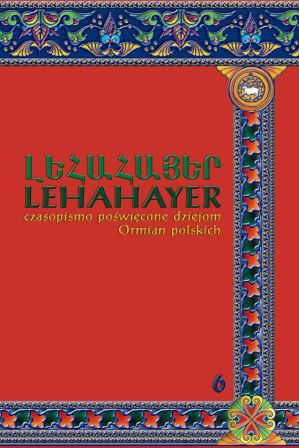 Summary/Abstract: The article is a report from a query that took place in March 2019. The author discusses sources that relate to the history of the Armenian Catholic Church in Galicia (i.e. the Archdiocese of Lwów, Lemberg) found in the Austrian State Archives (Österreichisches Staatsarchiv) and in the Library of the Mechitharist Congregation (Bibliothek des Mechitharistenklosters) in Vienna. The collections contain a wealth of sources on the history of the Church and the Armenians living in Poland on the territories acquired in 1772 by the Austrian Empire, and until now only some of them have been used in the scientific literature. They present the relations of the central offices of the Habsburg monarchy with the Galician Armenians (who, in the overwhelming majority, were Catholics), and the role of this minority in the provincial administration. The sources also denote the importance of the religious congregation of Mechitarists in the life of the Armenian Catholic Archdiocese of Lwów. Many future priests learnt the Armenian language and Armenian liturgy at the Viennese religious secondary school (gymnasium) led by Mechitarists, and later a number of them joined the congregation. The book of religious professions, the letters and personal files, which mention a great number of Galician names, not only of Armenian descent (like archbishop Samuel Cyryl Stefanowicz or Rev. Dominik Barącz), but also of Polish origin serve as evidence of the aforementioned bond.