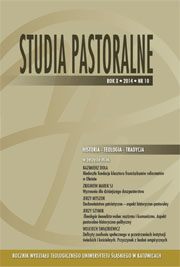 Summary/Abstract: This article gives an outline of the Domenican parish ministry in the Roman-Catholic Archdiocese of Lviv in 1918-1939, where 9 Dominican monasteries and the same parishes were located. Three parishes was incorporated into the monastery of Lviv. Polish Province of Dominican Order had got the most of the parish in the archdiocese of Lviv. Two parishes were transferred to the diocesan clergy in the second half of the 30 of the twentieth century. An important element in the pastoral care of the parish was parish catechesis in schools and outside them. Parish work was also accompanied by a variety of special pastoral care. Here I discussed only Marian shrines that worked at the Dominican parishes through which parishes are better developed. Other forms of pastoral special (brotherhoods and religious associations and work among students and intellectuals) has been omitted here, because they require separate studies. The pastoral activity intermingled typical folk devotions, the cult of relics and saints and more complex intellectual formation, aiming to deepen their religious knowledge. In all these activities preaching was essential. The article revealed research capabilities, as well as the state mainly from sources preserved in the collections of the Archives of the Polish Province of the Dominican Order in Cracow.