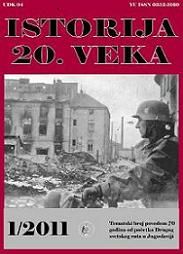 Summary/Abstract: Since the creation of the Independetn State of Croatia (NDH) on 10th of April 1941, it developed racial laws and pracitice which may be marked as purely antisemitic. Following the German example, a occasionally with their help, NDH conducted „the final solution“ of the Jewish „question“. According to some unique ways of handling this problem, it can be said that it was unique in this part of Europe. According to the partly revised document tittled The Vicitms of the wear 1941-1945, it could be estimated that on the territory od NDH, between 29.000 and 31.000 Jews were exterminated. Those figures not count several of thousands of the Jews which were temporarely stationed on NDH soil. Mentioned figures, showed that around 79% of the pre-war Jewish community that lived in the territory of Yugoslavia, that became NDH was exterminated. To the losses of the Jewish community aditional figure of 700 shoould be added which includes those who were acitive in the Royal Yugolsav Army or as resiters inside Communist Partisan movement. With only 0,59% part of the population, they represent 5,83% of the total losses. Which is ten times bigger than the Jewish part of the population. It is worth adding that the Jewish population was the only one which have more female than male losses (52,04%). nearly 80% of the killed Jews was in the first two years of the war, meaninig 1941 (23.109) and 1942 (24.692). Special feature of the solving of the Jewish question inside of the NDH, is that this is the only area in the Europe, where the local authorities exterminated more Jews than the Germans. This scale is 75 %: 25% for the responiblity of the local authorities. Of the complete number 96,18% of the Jews were killed in the concnetration camps, 2,64% in mass exectuions, and 1,18% in th prisons. The most notorious of whole death-camps was one at Jasenovac. Between 18.000 and 19.000 Jews were killed there, which is around 62% of the whole Jewish losses ane nearly half of the pre-war Jewish population in territory of NDH during the Second World War.