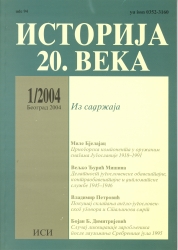 Summary/Abstract: One of the subjects to which historiography has not given enough attention is captive soldiers of the Kingdom of Yugoslavia’s Army; thus, their sufferings have not been analyzed adequately either. In the historiographic works, published so far, mostly the approximate numbers of captive and killed soldiers were stated. The aim of this work is to show the sufferings of the soldiers of the Kingdom of Yugoslavia’s Army from the territory of Serbia on the basis of a partly revised register “war victims, 1941-1945”, done in 1964. Register analysis has shown that 68.413 soldiers from the territory of Serbia were taken to captivity and they represent 47,91% of all the captives from the territory of Yugoslavia. 3,70% of soldiers did not survive in captivity and they represent 45,48% of all the members of the Kingdom of Yugoslavia’s Army that had died in captivity and 1,77% of all the soldiers of the Kingdom of Yugoslavia’s Army that had spent a certain period of time in captivity during the war. In the altogether number of the citizens from the territory of Serbia who had died, they represent 2,59%. The captives of Serbian nationality make 97,66% which is the absolute majority among the victims. 81,64% of all the prisoners of war from the territory of Serbia lost their lives under German jurisdiction and for 95,32% of all the captives who had died, a person responsible for their death was established. The analysis of the type of death in POW camps shows that 58,56% of captives died due to bad living conditions in a POW camp, while 23,63% of captives were killed. The most numerous group among the captive soldiers who had died consisted of agriculturalists (63,58%), while the army and police members were the ones who had been killed most frequently (they make 11,82% of the dead). As for the final number of captives, they make 5,62%.