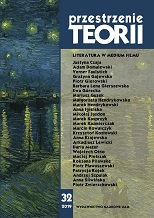 Summary/Abstract: Piotr Szulkin made his mark in the history of cinema primarily as the author of disturbing visions of the future. His four films made between 1979 and 1985 comprised the science-fiction tetralogy, which is still one of the greatest artistic achievements of this genre in Polish cinema. The subject of the article is the third production of Szulkin’s series – the post-apocalyptic film O-Bi, O-Ba: The End of Civilization from 1984. In the film, the director creates a suggestive vision of a world destroyed as a result of nuclear conflict, in which the original functions of literature and the written word are forgotten. The author article analyzes the way in which forsaken literary artifacts are used in the post-literary reality of the film. An important element of his considerations is also the post-apocalyptic reception of the biblical text, on whose elements the mythology of the film’s world is based.