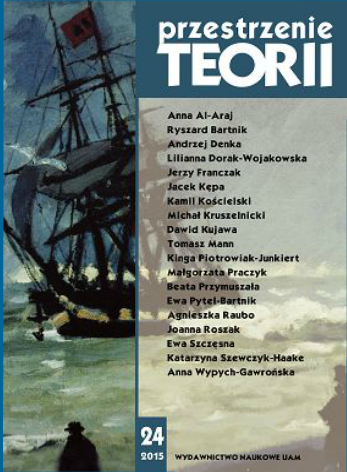 Przestrzenie Teorii [Spaces in Theory] is a theoretical and literary journal of scholarly criticism. Established in 2002 in the Faculty of Polish and Classical Philology of the Adam Mickiewicz University in Poznań (AMU)., it is co-edited and developed in a close cooperation with the Faculty of Polish Studies at the Jagiellonian University in Kraków. In the past, Przestrzenie Teorii was issued once a year, but since 2007, the journal is published by Adam Mickiewicz University Press bi-annually. The journal is refereed and has a nationwide range. It has also been able to attract growing interest in academic communities throughout Europe and overseas. Each article is preceded with an English translation of its abstract. The journal reflects the research interests of authors from across a wide range of universities and colleges in Poland and presents translations of texts of distinguished foreign theoreticians in literature publishing abroad. The journal undertakes to present key and essential problems in the contemporary criticism and theory of literature, provides a platform for a transdisciplinary dialogue, in which arguments, controversy and complementarity of the contributions reflect and shape the present research and artistic awareness and consciousness (at the scholary community level). The published texts, presented in diversified methodological approach, address both aesthetical and poetical problems, show particular areas of research in philosophy and physics encompassing theatre and film, but also drama, fine arts and music, which enlight one another, correspond with one another, or reveal condradictions. The journal is characterized by its interdiciplinary approach, participates in the present-day scholarly discourse in the field of the philosophy of science and attempts to effect its policy of fostering the polyphonic form of literary studies in drama. The creative dramatics of the journal is co-produced by particular thematic sections: essays, interpretations, presentations, translations and reviews. Przestrzenie Teorii, presenting an interesting overview across a wide spectrum of modern thinking, becomes thus a multi-dimensional space of post-modern scholarly declarations of theoretical turns or shifts and of view and opinions. Presented theoretical considerations are not limited in their scope to just literature, but open up to the vast areas of culture and arts.