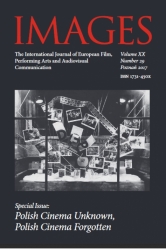 Summary/Abstract: Autobiographical threads occupy an important place in films of Marian Marzyński and Leszek Leo Kantor. Interesting is the convergence of life experiences common to both authors. We can indicate a lot of parallelisms in biographies of both directors. Certainly, the most important analogy is the fact that both of them survived the Holocaust as children. Common to both artists is also experience of anti-Semitic campaign of March 1968, as a result of which they were forced to emigrate from Poland. The objective of this article is to demonstrate how this personal experience of exile resonates in their work.