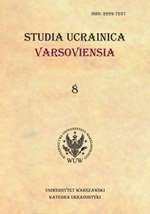 Summary/Abstract: The scientific report describes the literary and cultural studies discussed at the conferences organized by the Ukrainian Studies Department at the University of Warsaw in 2018and 2019. There are three themes distinguished here: research relating to the sacred, childhood and autobiography. The lectures cover the history of literature since the times ofKievan Rus’ through the 19th and 20th century up until the present day, as well as the issueof theories and connections between literary and cultural studies. The cultural studieslectures exhibit a great variety of topics stemming from the Ukrainian art in the 20th and21st century as well as theatre, music, fi lm, etc.